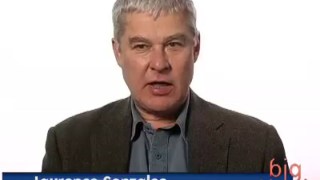 Relying on a system of mental models can confuse associations with reality says Laurence Gonzales.

give you an example of a really bad mistake that I made using mental models.  When I was a little kid, my grandmother had an ashtray that looks like a rattlesnake.  It was a beautiful thing, made out of stone, and it was very realistic.  And I had this model in my head of a rattlesnake that was, you know, benign, it was a harmless thing and it had these nice emotional associations with my childhood and my grandmother.  And frankly, I never thought about it again.  I don’t know where it went.  But one day as an adult, I was hiking in the Santa Monica Mountains and I came across the ruin of a stone house and I thought, “Oh cool.  I’ll look for a souvenir here.  I’ll find some old tool or something to bring home with me from this ruined house in the stone rubble.”  And I started searching around and then all of a sudden, lo and behold, there was my grandmother’s ashtray.  I’m like, “What a miracle!  My grandmother’s ashtray, how did that happen?”  And I reached out to pick it up and then I saw its tongue come out.  And, of course, I realized the very stupid mistake that I made because I had all these intellectual knowledge that could have prevented me from doing that.  But they didn’t because I was operating on a mental model, the closeness association I had and it was stored away.  I haven’t thought about it for decades, and it was my grandmother’s ashtray.  So I knew, intellectually, for example, that the chances of finding my grandmother’s ashtray anywhere in the known universe were approximately zero.  I knew also that I was in the mountain wilderness where rattlesnakes are really common in California.  I knew that they like to poke around in stone ruins ‘cause mice live there.  I knew all these stuff and it did me no good.  So this is what I mean when I say smart people do stupid things.  This is the type of mistake that certain scientists call an intelligent mistake because all my learning, my most important learning caused the mistake