Kevin Zollman is an associate professor in the Department of Philosophy at Carnegie Mellon University. He is also an associate fellow at the Center for Philosophy of Science at the[…]
Go to Profile 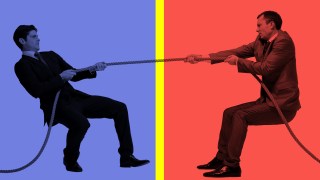 Take it or leave it: How to control a negotiation like a game theorist

Negotiation looks on the outside to be extremely difficult. But if you're confident enough to have some patience from the outset, it's as simple as telling the other person to "take it or leave it."
▸
3 min
—
with
Kevin Zollman

If you want to be an expert negotiator — or even a savvy game theorist — you must master one thing. Patience. Kevin Zollman, a professor at Carnegie Mellon and one of the leading game theorists in America today, offers us some insight into how to gain the upper hand when it comes to negotiating. Game theory comes in handy in many facets of life, from buying a car to asking for a raise. Zollman even goes as far to tell us not only how to attain negotiating power but how to sustain it, by simply telling the other other party to “take it or leave it.” Kevin Zollman and Paul Raeburn are the authors of The Game Theorist’s Guide to Parenting: How the Science of Strategic Thinking Can Help You Deal with the Toughest Negotiators You Know–Your Kids.

Kevin Zollman: Game theorists have spent a lot of time analyzing various some models of negotiation. The idea is that you take what feels like a complex interaction, distill it down to it’s very simple elements and then you model it using the tools of game theory.

One of the things that game theorists have found is that in negotiation, especially in negotiations where we’re debating how to divide up some resource—classic example in game theory is dividing up a pie, but it could be anything, like money or some time with a toy, or anything where we have to decide how to divide it up.

Game theorists have discovered a couple of central principles that make a big difference to who does better in those negotiations.

One of the critical things is how patient you are, how willing you are to stay and continue to negotiate.

But if you come into a car dealership and you say “I don’t need a car anytime soon… if you give me a good deal today I’ll take it, but if you don’t I’ll leave, maybe I’ll come back tomorrow, maybe the next day, maybe a month later,” then you’ll get a better deal. So patience is very important.

If you’re trying to win in a negotiation you want to try and find ways to make it so that you are more patient than the other person—that is you have less to lose from letting the negotiation drag out than does the person you’re negotiating with.

So don’t wait until the last minute to buy a new car, don’t run into the bosses office right before you need that big raise. Always choose situations where you just suggest it. Say “No urgency, but I can come back later.”

By doing that you create this situation where the other person can’t take advantage of your impatience, they can’t give you a deal that is effectively a “take it or leave it” deal.

Another important thing in negotiation that can lead to better outcomes for you is: you always want to be in the position to be able to offer take it or leave it deals to the other person.

So if you can say to somebody else “here’s the deal, take it or leave it,” now they’re put in a position where they take it or they get nothing.

Now it’s tricky, of course, because I can say to you “take it or leave it,” but that doesn’t mean that it really is that way.

So by creating situations where it really is a take it or leave it situation, that can help you, but it’s also nerve-racking and dangerous so it’s a strategy that you have to be very careful about. But if you can be in a situation where you can offer somebody a true take it or leave it deal, that can often times improve the outcomes of the negotiation for you.

Why elementary schools should teach poker