Jordan is now in his 17th year of building disruptive technology companies, and is the co-founder and CEO of Neurohacker Collective. Early in his career, he helped start the online[…]
Go to Profile 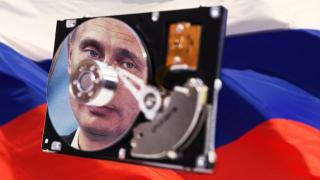 How Russia’s Election Meddling Created a New Kind of Propaganda

Russian hacking is changing the game in global warfare by taking the battlefield to the internet, where Facebook is the front line.
▸
6 min
—
with
Jordan Greenhall

Russian hacking is less “guys-in-hoodies-doing-big-nefarious-things” than it is a few dozen people trying hundreds of smaller things to see what catches on and gets sent up the information ladder. Jordan Greenhall explains that what the Russian hacking units are doing is being ever changing and ever fluid and essentially flooding misinformation into parts of the internet—governments and companies and individuals included—so that the traditional American “top down decision making” process gets confused. After all, you’re much more likely to believe an email coming from your boss than one coming from “vlad@moscowhackercollective.biz”.

And while it may seem overwhelming, Jordan goes on to explain that this kind of information warfare is much more attune to how one might invest a financial portfolio than make a singular bet. The Russian hackers make small, diverse picks and then see which one pays off. It’s a strategy that, well, if you’ll look at who our President is right now, seems to have paid off.

Jordan Greenhall: All right. So let's do Russian hacking. And what I want to do is I want to put quotes around "Russian hacking" because we're actually talking about a question of how we go about making sense of everything all together. So "Russian hacking" is not an event as much as it is a phenomenon that describes a very large number of things that different individuals, depending on the particular location in the social field, interpret differently.

So yes I think this is an excellent example of this new emergent mechanism of how we go about doing social control. And it's interesting because if you're looking at "Russian hacking" from the blue church perspective you're actually thinking about something that isn't actually how it's working and you're going to be making particular mistakes. So you will think I think, I mean certainly I'm defining the blue church so certainly if you are in the blue church modality you will think that there is some kind of hierarchical control structure with a small number of decision-makers, we will call them the Russians, who are principally responsible for the behavior of the system under investigation. So you are looking for an expertise hierarchy, somebody who is in charge and how their expertise hierarchy is percolating downward in its downward causation fashion to generate the results of what you're seeing.

And that's actually not an appropriate evaluation of what's actually going on. Instead "Russian hacking" and the degree to which there is a specific understanding on the part of the Russians, which there certainly is they're clearly, what is the phrase somebody used—“punching up”?—They're clearly dramatically more effective right now than one should expect them to be given their actual capacity and power in the world because of the higher quality strategy in this new decentralized environment is I think actually recognizing the obsolescence of that notion of a top down decision-making framework where one of the primary strategies is to find people who are operating in that fashion and throw effectively sand in their eyes, create obfuscation mechanisms that cause top down decision making trees to have a hard time either understanding what's coming up to them or having their actuation potentials move down while simultaneously being part of a very large decentralized, not centralized but a decentralized collective that is fluid and has an up-regulation behavior.

So modulating things like okay there seems to be an energy and a focus and an ambient interest among some group of decentralized individuals around certain ideas, how do I provide them with an increase in localized energy or capacity to enable them to focus in a certain area and engage in activation. So it's more of a potentiation strategy and much less of a control strategy.
And then the other side of it, and this is a deep insight that I don't think anybody is really grasping, including myself, is the distinction between, for example, mimetic warfare and information warfare. And I think many of the blue church folks are particularly missing in on this. Mimetic warfare is in many ways a legacy of the kinds of stuff that television does very well: “Let me tell you a story which is designed to create an effect in you that will move you emotionally and cognitively.” And that, of course, changes and the nature of mimetic warfare changes in the Internet domain and we've seen that broadly: Kids on 4chan generating images that flow out very rapidly and are selected for almost ecologically.

But there's also information warfare, which is the recognition that you can actually use very high-quality statistics and very high-quality precision to modulate subtle causation in the environment. So for example, I'll give you sort of a hypothetical. Let's say, for example, my statistics told me that there was a sensitive point in one of the Florida districts where the likelihood of decision making that say there was a 51/49, we don't know exactly, is open, the possibility space was open on how that would play out. And I could generate some kind of very lightweight intervention that would increase the rate of traffic jams in that environment by say hacking the stop lights so the stop lights are on a different frequency. And thereby decreasing the turnout and by decreasing the turnout could probabilistically affect that particular sensitive decision point.

That's information warfare at a very, very high level and the whole point is subtle, very distributed, highly probabilistic. It's much more like the way that one might do a distributed portfolio in finance as opposed to a concentrated bet. And that's another piece of this whole story the kind of thing that the blue church is very challenged to do because it's decision making structure requires that it make a small number of big bets, but that this new decentralized mechanism can in fact make a very large number of very small bets and they can be extremely fine-tuned.

So it's a collective search algorithm with the ability to modify because remember we're dealing about symmetry and communication. So I can grab what you did, I can modify it and push it back out, and this enables a completely different invention, construction and dissemination function. I think that's fundamental. Like if you're not understanding how to engage in that strategy you're going to be selected against increasingly over the next even short period of time like three or four years.

The Basis of Education Should Be Questions, Not Answers