John Micklethwait is Editor-in-Chief of The Economist. Before that he edited the US section of the newspaper (1999 - 2006) and ran the New York Bureau for two years, having[…]
Go to Profile 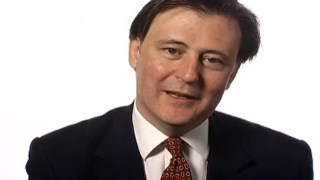 Religion is back in the political life of Europe but not in people’s hearts.

Question: Do you align modernity with religion?

Micklethwait:    We actually align modernity with pluralism.  I think that that’s the big category mistake.  Peter Berger, who’s the great sociologist of religion, you know, who one time was a big supporter of the secularization thesis, I’ll give you the most, sort of… the biggest proponent of it, when he switched and suddenly said that pluralism is the modern thing, I think that’s it and that’s the core of why we think an American model, loosely termed, is sweeping the world.  People are choosing which religion to have and doing the same thing as Thomas Jefferson did, you know, they’re looking at the Bible and cutting out the bits they don’t like.  It’s like I want this and I want this and I’m going to change this, it’s a much more individual thing and the reason why that is relevant to politics and public life is if people are choosing their religion rather than just inheriting it then that means when they go into the voting booth, they go into work, they’re not going to leave it at home in the same way that they may have done before.

Question: What is the relationship between religion and globalization?

Micklethwait:    Well, what’s happening is not so much being caught by progressives, it’s the forces of progress that are driving it.  You look at globalization, you look at technology, you look at… lots of democracy, you know, you’re giving these… when you’re give people a vote… strangely, a lot of religious people go and vote for religious parties, when you give people technology, strangely, it’s the people who actually use it best were often people like the mega-churches that are very, very quick onto these.  If you look at the way that globalization spreads.  I think globalization actually encourages the demand for religion in 2 ways.  As one group of people who think we want religion to be a sort of storm shelter and you see a qualm of that particularly in the Islamic world but you can [focus it, what is it,] rural Arkansas or rural India, you could see these people who think, the world is out there, it’s a frightening, difficult place and religion is a form of protection against it.  By contrast, what we also identified which is sort of an unappreciated bit is for lots of people, lots of up and coming people, visit the mega-churches in America, you don’t see poor downtrodden people there, you see smart, young, suburbanites, they see this as a way to get ahead, to get ahead of other people, very, very true in China, very, very true in Korea, very true in Latin America where we see Pentecostalism spreading very quickly and the one exception is Europe which we can sort of come back to, which is the harder case to make this argument.  But all other areas of the world, for better or worse, you know those things are being aligned and actually it’s going with a… if that’s a sort of demand side that you… a deeper demand side is actually, whether we like it or not, man seems to be a Theotrophic beast in a given… the option to believe in God or some kind of afterlife or some kind of meaning, they will do so and if you want a quintessential example of the sort of modern religion, it’s your president.  Look at Barack Obama, there’s a man whose life… he wasn’t sure about it, he found meaning in a Chicago church and what’s interesting about Obama, I think, is that he is somebody who once you take him on the international stage which is obviously where he’s already on, but once you put that particular element of faith on the international stage, I think you’re going to see a very different reaction to American religion that you have with George W. Bush. George W. Bush typified all the things that Europeans in particular found suspicious and wrong about American religion.  It seemed very hard, very intolerant, it wasn’t the same thing but I think a lot of Europeans could identify with this clever, young, well-educated man, looking for something more to life and discovered it in the church.  I think it’s any accident at all the best-selling religious book is called “The Purpose Driven Life,” that’s what… that’s a bit which is striking a chord of globalization.  So that’s all the demand side, that’s why people are going for it and that’s the last thing on it.  There is now quite a lot of science, again, for better or worse, it shows that religious people are wealthier, healthier and happier than non-religious people.  So to that extent, that “works” and you know, Dawkins is very interesting on that… the other thing which is driving religion, if that is the demand side is supply.  And you have a spread of American style, competitive religion, where you are, you know, you make great efforts to make religion much easier, you make churches more comfortable, you use every form of modern technology, you embed it to every people’s lives and you see that spreading into other religions like Hinduism, Buddhism, Islam, as well and you see it spreading all around the world.