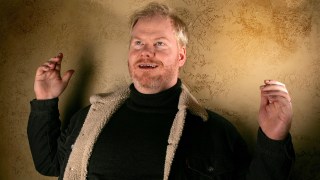 Jim Gaffigan on Political Correctness, Freedom, and “Game of Thrones”

Is political correctness just censorship in disguise? If so, do comedians have an obligation to fight against it? Comedian Jim Gaffigan on the limits of speech, freedom, and our self-knowledge.
▸
7 min
—
with
Jim Gaffigan

Comedians are contrarians by nature. Many claim that “nothing is off limits” and refuse to follow dictates of the so-called “PC Culture,” i.e. the idea that some words are off limits because people find them offensive.

Stand-up comedian Jim Gaffigan doesn’t buy this idea at all. He doesn’t think of being politically correct as being censored. Instead, being politically correct is about being respectful, or even just watching your tongue once in a while. There’s no doubt that some words hurt. Some words have a history connected to them that shouldn’t be ignored just because someone thinks it makes them seem daring.

Society is changing, and it has always been changing. Just a few decades ago, wearing a seatbelt wasn’t a necessary thing, and kids were known to play in the trunks of cars while their parents sped around corner. Now we know better. In the same vein, many of us have grown up a little, and know the world is a better place when we demonstrate respect by by making sacrifices for one another.

Perhaps some people find such language funny. Everyone has their own sense of humor. From a comedian’s stand point, such as Jim Gaffigan’s, there are plenty of other jokes that can be made. Why waste time on jokes that deliberately hurt others?

This doesn’t seem like the worst change from generation to generation. The PC Culture isn’t asking for a lot. It asks for a bit of respect, to acknowledge the pain linked to some words, and give that language some distance. All in all, it’s being sensitive to the people listening.

Jim Gaffigan:  Standup comedy has a rich history of being associated with being against censorship. It’s, you know, comedians are contrarians. You tell a comedian to not do something similar to a five year old that’s sleep deprived, that will be the first thing they do. If you say do not go on stage, do not talk about the CEO at this corporate event comedians will instinctively do that. So any form of censorship is counterintuitive to a comedian. So comedians pride themselves on saying any topic – nothing is off limits, dah, dah, dah. That being said I also think that as a comedian I believe that there’s nothing that’s off limits. But I also think that as human beings we’re constantly censoring ourselves. I’m censoring myself right now for this. I’m trying to appear smart and I’m not doing that good of a job. But I do think that the PC culture in my opinion is of great value. We should always strive to be more sensitive and understanding and similar to the concept of liberty which I mentioned before is ever expanding. So our idea of freedom today is a much better fulfilling idea of freedom than our founding fathers even envision probably.

But it’s the same notion of freedom. So the idea of politically correctness I don’t think that has to do with censorship. I think that has to do with a certain sensitivity. So, you know, words that are very toxic it’s unnecessary. If you also identify yourself as a clean person it’s not necessary to say shocking words. That being said there are great comedians that deal in shock, that deal in irreverence. But similar to liberty irreverence – what’s irreverent today is stale tomorrow. So if you chase irreverence that’s a pretty slippery slope. I mean Don Rickles can do it but there’s been a lot of awkward moments for Don Rickles even on a public stage. But I don’t know. It’s also very personal but I think that whatever we call political correctness or whatever the term might be saying things that aren’t sexist or could be construed as racist it’s not that hard of a sacrifice. Now that’s not to say that people aren’t overly sensitive. I think the bigger issue which I even, we did an episode on is the fact that we are humans and there is the mob mentality. That same mob mentality that would go on PokeRoms in Eastern Europe is the same mentality that people engage in when someone does a tweet that’s of poor taste. So I think it’s not so much the crime, it’s the punishment. And I think that human beings, I feel like we have this arrogance. Like every generation thinks we got it figured out. We’re the greatest generation.

We got rid of fascism. When the reality is that every generation thinks we’ve figured it out. Medical science. We’ve got it. We’re scientists. What we do is we leech bodies and that’s how you cure diseases. There’s an arrogance there that we don’t – even today we’re like we’ve got to figure it out, you know. Like even with the transgender thing. I think that there’s almost this sensibility like we finally figured it out. Everyone’s equal once we get these trans people. But there is a bigotry that exists in our culture that we’re not aware of that our children will point out and we will be as resistant as our parents are to certain things. Like that’s not homophobic. But, you know, my parents were very liberal for their age but I remember when I moved to New York in the early 90s I just thought it was so funny when some of my friends from New York would say people in the South they’re prejudice, all of them. And I just thought that was great irony. Really? All of them? Isn’t that ironic? So it’s something where I just think that there’s this certain amount of humility and that we should carry. I’m not saying I execute that humility. I’m just saying as an observer whether someone – it’s like everyone makes mistakes.

I mean I haven’t since 81 – 81 I made one mistake. Then no mistakes. But I just think we should be more forgiving. And I think it’s more interesting the Teflon people. And I mean that as a compliment. People that – there are some people that can make mistakes and it doesn’t bother them on a social – in a public atmosphere. And some people make one mistake and they’re guilty forever and they’re indicted in it. And I think that goes back to our mob mentality. So in the end we’re animals. We’re like these strange tribal people that like everyone who gets around on Sunday night and watches Game of Thrones and watches this strange culture of this made up world like we don’t have the awareness that we’re just as crazy as that world of Game of Thrones. We just don’t want to look at ourself. Anyway I’m a great guy. That’s what I’m saying.

Diarrhea: Not Just an “Oregon Trail” Disease, but a Serious Risk to Soldiers