James Gleick was born in New York City in 1954. He graduated from Harvard College in 1976 and helped found Metropolis, an alternative weekly newspaper in Minneapolis. Then he worked[…]
Go to Profile 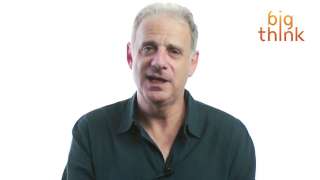 Our anxiety about information overload is unwarranted, says James Gleick, even in the digital age. The internet will cause a readjustment in the way we think, but so did the telegraph, the radio, and the telephone.

James Gleick: Humanity has always been readjusting to developments in the flow of information.  Printed books appeared in Europe.  People had to readjust their thinking.  The telegraph made it possible to send instantaneous messages from one place to another place 100 miles away.  People had to readjust and they weren't always aware of the ways in which they were readjusting.

One of the ways the telegraph changed us as humans was it gave us a new sense of what time it is.  It gave us an understanding of simultaneity.  It gave us the ability to synchronize clocks from one place to another.  It made it possible for the world to have standard time and time zones and then Daylight Savings Time and then after that jetlag.  All of that is due to the telegraph because, before that, the time was whatever it was wherever you were.  It was only when the telegraph made it possible to synchronize human activity across great distances that we needed to understand time in what, I think it’s fair to say, the modern way we understand it now.

Well, how is the Internet going to force us to readjust?  Certainly in ways that we can't yet guess because these are early days for the Internet and just as certainly in ways that we’re beginning to get a glimmering of.  We already, I think, are familiar with this syndrome of being at a dinner party and hearing an argument break out about who was the star of that movie five years ago. . . . You reach for the device in your pocket because you know that, even if you don't know the answer, the answer is a thumbs-length away.  That changes us.  I mean, it makes the conversation seem pointless, boring.  I don't know.  Choose your poison.

We have all these new information organizers.  We have Wikipedia, which is a successor to the encyclopedias that began spreading across Europe and China hundreds of years ago.  These old information organizers were attempts to make sense of a confused new world.  The more knowledge spread, the more people needed to create categories, to create filing systems.  Alphabetical order had to be invented to help people organize the first dictionaries.  On the other hand, we may have reached a point where alphabetical order has gone obsolete.  Wikipedia is ostensibly in alphabetical order, but, when you think about it, it’s not in any order at all.  You use a search engine to get into it.  The fact that G’s come after the F’s don't make any sense.  So sure, that's part of the evolution of the species.