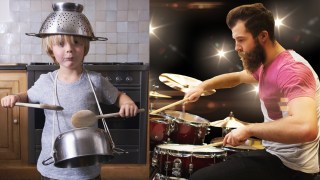 What does it mean when someone calls you smart or intelligent? According to developmental psychologist Howard Gardner, it could mean one of eight things.
▸
9 min
—
with
Howard Gardner

What does it mean when someone calls you smart or intelligent? According to developmental psychologist Howard Gardner, it could mean one of eight things. In this video interview, Dr. Gardner addresses his eight classifications for intelligence: writing, mathematics, music, spatial, kinesthetic, interpersonal, and intrapersonal.

Howard Gardner: Currently I think there are eight intelligences that I’m very confident about and a few more that I’ve been thinking about. I’ll share that with our audience. The first two intelligences are the ones which IQ tests and other kind of standardized tests valorize and as long as we know there are only two out of eight, it’s perfectly fine to look at them. Linguistic intelligence is how well you’re able to use language. It’s a kind of skill that poets have, other kinds of writers; journalists tend to have linguistic intelligence, orators. The second intelligence is logical mathematical intelligence. As the name implies logicians, mathematicians, scientists have that kind of intelligence. They’re able to do mathematical proofs. They’re able to do scientific reasoning and experimentation. And it’s great to have language and logical intelligence because most tests really focus on that. And if you do well in those tests as long as you stay in school, you think you’re smart. But if you ever walk out into Broadway or the highway or into the woods or into a farm, you then find out that other intelligences are at least this important.

So that’s intrapersonal intelligence. The eighth intelligence which I added some years ago is the naturalist intelligence. And that’s the capacity to make important, relevant discriminations in the world of nature between one plant and another, between one animal and another. It’s the intelligence of the naturalist, the intelligence of Charles Darwin. I missed it the first go around when I wrote about it, but I tried to atone by adding it to my list. And, by the way, you might say well but nature isn’t so important anymore. But in fact everything we do in the commercial world uses our naturalist intelligence. Why do I buy this jacket rather than another one? This sweater rather than another one? One hair style rather than another? Those all make just the naturalist intelligence because the brain is very adaptive. And when an old use of a brain center no longer is relevant, it gets hijacked for something new. So we’re all using our naturalist intelligence even if we never walk out into the woods or into the savannah of East Asia. The two other intelligences which I’m interested in, one of them is called the teaching or pedagogical intelligence. The intelligence which allows us to be able to teach successfully to other people. Now you could have two people who have exactly the same expertise and knowledge in the field, but one is a very good teacher and the other isn’t. That probably doesn’t surprise individuals so much. But what got me fascinated was as young as two or three, kids already know how to teach. Now what does that mean? You show a child how to do something — let’s say a three- or four-year-old and then you ask the child to explain it to an older person or to a younger person. And even the three- or four-year-old will explain it very differently to a young person, will go through details, point things, and speak slowly. And with an older person it would be much more elliptical and say well you do this and that and then you can figure it out. So that shows as young as three, let’s say, we already have teaching intelligence. The other one is one which I think is going to be difficult to prove to a skeptic, but I call it existential intelligence. And existential intelligence is the intelligence of big questions. Philosophical questions, artistic questions. What does it mean to love? Why do we die? What’s going to be in the future? My pet bird might have more musical intelligence. The rats who are scurrying around the floor might have more spatial intelligence. But no other animals have existential intelligence. Part of the human condition is to think about questions of existence. And I like to say every five-year-old has existential intelligence because five-year-old are always asking why this, why that.

But the difference between a five-year-old and a philosopher is the five-year-old doesn’t pay too much attention to the answer whereas philosophers and other people who develop existential intelligence are really very interested in how we attack questions like that. So again whether there’s eight intelligences or 10 or 12 is less important to me than having broken the monopoly of a single intelligence which sort of labels you for all time. I think if we lived forever, we could probably develop each intelligence to a very high degree. But life is very short and if you devote too much attention to one intelligence, you’re not going to have much time to work on other kinds of intelligences. And so the big question is should you play to strength or should you bolster weakness? And that’s a value judgment. Scientists cannot give you an answer to that. If, for example, you want to be a jack of all trades and be very well-rounded then probably you’re going to want to nurture the intelligences which aren’t that strong. If, on the other hand, you’re dead set on really coming to the top of some particular heap, then you’re probably going to find the intelligences that you’re strongest at and really push those. And, you know, if a parent came to me and said well should we supplement or should we accentuate, I would say well tell me what you would like your child to do. Or better let the child tell you what he or she wants to do rather than say well science says you should do one or the other. I think it’s a question of values, not of science.

Maybe There Is No Autism at All, But Many Different Kinds of Autism