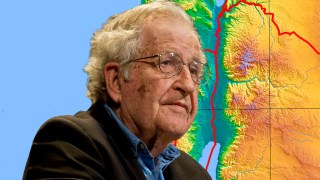 How will the changing global powers impact the Israel-Palestine conflict?

The Israel-Palestine conflict is one of the most serious in the world.

Noam Chomsky: That’s one of the most serious crises in the world. The United States and Israel are in grave violation of international humanitarian law. It’s not my opinion, it’s the opinion of the world’s highest judicial authority, the International Court of Justice, which declared that the provisions of the Geneva Conventions applied to the occupied territories, which means that all movement of population into those areas, all the settlements, are illegal. The court determined authoritatively that the wall that Israel is building, which is clearly, by now, an annexation wall, is in ipso facto of violation of international humanitarian law, in so far is it’s there to protect settlers, which is may be 80% to 85% of it.

The [George W.] Bush administration is the first one to have officially declared support for Israel’s policies, of take over, of what’s valuable to it in the occupied territories, which makes the two countries in severe; and of course the U.S. funds it and provides the diplomatic and military support required for it.

U.S. power centers appear to be pretty happy with this. The U.S. corporations, for example, don’t seem to object to having a highly militarized ally with high technology, very loyal, because it has no choice, once it decided to move towards preferring expansion to security, as it did years ago. Technically they are capable of pursuing the policies that they are following.

The major Arab states may not like it, but they’re not going to try to do anything about it. The rest of Europe refuses to take more than a passive role.

The Palestinians, the nation is being destroyed. That’s a rare event in history, for a nation to face destruction; but it’s happening. The United States and Israel at the moment, and in effect for many years, have been internationally isolated in their refusal to accept diplomatic settlement in accord with what has been an overwhelming international consensus; some kind of two-state settlement on the international border with some modification of borders, and they still are rejecting it, alone.

The Arab states have explicitly come out in favor of it. Iran has a stated its agreement with the position of the Arab states. Hamas has called for it. Europe, of course, and non-aligned countries of course, but the U.S. has overwhelming power in that region. And if it stands in the way of the settlement, it won’t take place. Now, with all the conflicts this can lead to, and for the local populations very serious, but even with ramifications elsewhere.

What are your thoughts about the passing of William F. Buckley?