Rainn Wilson is an actor best known for his role as the egomaniacal Dwight Schrute in the NBC sitcom "The Office." He grew up in Seattle, Wash., as a member[…]
Go to Profile 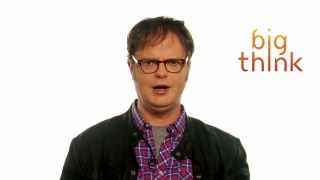 How to Solve Creative Blocks

People have trouble living creatively when they don’t know who they are or what they’re about. The best thing to do if you’re blocked is to make radical changes and get outside your comfort zone.

Question: Why do some people get creatively blocked?

Rainn Wilson: I think "creative blocks" come from people’s life journeys.  If you don’t know who you are or what you’re about or what you believe in it’s really pretty impossible to be creative. So I think a lot of times when people have "creative blocks" and I know my share of friends do as well if they’re at just some stuck point.  They’re not sure what to do with their lives or their writing or their photography or their filmmaking or whatever it is that they’re doing.  I think the best advice is you have to change your life up completely; to go on a trip, to go spend a year being of service.  Be willing to take some major drastic action to get you out of your comfort zone and go inside, not outside.  Our society is all about focusing on the externals, "These people like me, I'm successful because of these people, they view me as being good and we need to take that vision and instead of expanding it outwards we need to look inside ourselves.

I think meditation helps greatly with creativity.  It doesn’t.... If it’s a pure expression of yourself no matter what it is or what medium, it’s going to shine.  It’s going to resonate.  You could look inside of yourself and you could have a canvas and you could paint a dot in it, but if that is where your creative purpose is taking you then it needs to be that dot.  Again, we’re so focused on the externals about like well he did this and he already did this and tons of people are already doing that, I need to do something new and you’re just looking outwards all the time and you’re not taking that time and that is what... a trap of technology is to just always have our vision somewhere else, somewhere else, in the future, looking outside of ourselves. And I think taking the time in the morning to connect with your breath, that's where the purest impulse comes from.

Question: Is creativity for everyone?

Rainn Wilson:  Creativity is absolutely for everyone.  I firmly believe this.  I think if you’re the driest accountant with the plastic pocket pen protector it’s in how you interact with the world.  There is artistry in everything that we do and there is expression in everything that we do and you see that in the game of chess as you...  I used to play a lot of chess and competitive chess and study chess and as you get to the grandmasters and learn their styles when you start copying their games like the way they express themselves through...  The way Kasparov or Bobby Fischer expresses themselves through a game of chess is it’s astonishing.  You can show a chess master one of their games and they’ll say "Yeah, that is done by that player."

So it doesn’t matter.  It’s again, about that yearning to transcend.  There is a surrender to a power greater than one’s self as every artist or scientist or thinker talks about a certain point when it’s no longer like their brain.  It’s like the ideas are like streaming through them and that can happen with anyone.  If you’re a janitor you can do it through your work or on the side or how you are with people, but this is the mission of Soul Pancake is to show that everyone is an artist.  Everyone is creative in their own way and that that creativity is a great thing.  It’s a human thing and it needs to be nurtured and it can help us go down life’s path and help us to become deeper, richer, more satisfied human beings.