Dr. Tal Ben-Shahar is an internationally renowned teacher and author in the fields of happiness and leadership. After graduating from Harvard with a BA in Philosophy and Psychology and a[…]
Go to Profile 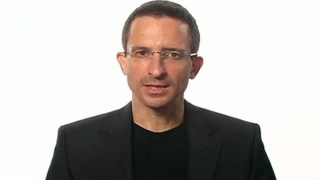 How to Fail Well

Tal Ben-Shahar’s most important lesson to his students to be sure to fail, and to fail well. He explains why this is and introduces us to the most successful individual in history at failing, Thomas Edison.

Question: What is the importance of failure?

Tal Ben-Shahar: One of the mantras that I repeat over and over again to myself, to my students, is learn to fail or fail to learn. One of the things that I tell my students about halfway through the class -- when it's too late to drop the class and they've already gotten to know me a little bit better -- I tell them that I wish them that they fail more, and I truly, sincerely mean it, because it's only through failure that we can learn -- no, it's not true. It's through failure that we can enjoy deep learning. It's through failure that we become more resilient and stronger. And if you look at the life of any successful person, they've always had major as well as minor failures.

Question: Have any historical figures exemplified the concept of failing well?

Tal Ben-Shahar: Sure. Thomas Edison patented 1,093 inventions, more than any other scientist inventor in history. He's also the scientist, as far as we know, who has failed the most times. When Edison was working on a battery, one of his inventions, an interviewer came over and said to him in the interview, "Edison, you have failed a thousand times; give it up." To which Edison responded, "I haven't failed a thousand times; I've succeeded a thousand times. I've succeeded in showing what doesn't work." Edison also famously said, "I failed my way to success."

What Keeps Tal Ben-Shahar Up At Night