Hooman Majd was born in Tehran, Iran in 1957, and lived abroad from infancy with his family who were in the diplomatic service. He attended boarding school in England and[…]
Go to Profile 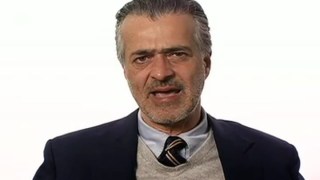 Hooman Majd on the duality of orthodoxy.

Question: What are some of the contradictions that characterize Iran?

Majd:    I titled my book “The Ayatollah Begs to Differ.”  The subtitle that was something that came up and, you know, as a kind of marketing tool, publishers like subtitles.  I think “The Ayatollah Begs to Differ” itself was a paradoxical title to some people and the reason I chose that title was because I was trying to get across the fact that Iran is not this monolithic system where there’s a dictatorship and all the clerics agree and they kind of run the country in a dictatorial way, they maybe authoritarian but they’re not dictators.  And the paradox I think is the paradox of modern Iran is that almost everything you think of Iran, there’s another side to Iran that we don’t know.  For almost anything you can mention, you know, in terms of the politics, just purely on the political level, you know, what we were talking about earlier, the system for electing a president, whether the people believe that the president has gotten all the power he should have or does… should or maybe he doesn’t have the power, the paradoxes that we… everyday life in Iran is full of paradoxes and there are paradoxes in every society, it’s not just Iran.  But Iran perhaps more so because it is this unknown mysterious place that Americans really don’t have a lot of contact with but I couldn’t put my finger on the one biggest paradox but I think perhaps for Americans, the biggest paradox would be is that the for all its religious fervor that exists in Iran, it’s also a very secular country in many ways.  I’ll give you one example, you could be in a cab in New York City and if it’s prayer time, if it’s 12:00 noon, your cab driver might pull off at the side of the street and take out his prayer rug and pray right on time and that’s in New York City where we have a lot of Muslim cab drivers.  In Tehran, there’s no call to prayer, people go about their business, they’re like… you’re driving around the city at noon and this is a Islamic republic that is avowedly Islamic, there’s no audible call to prayer, people don’t stop their business and rush out and pull out their prayer mats and pray.