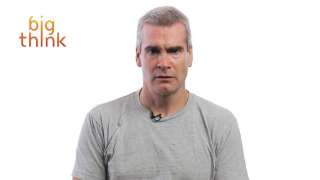 Henry Rollins: Education is the End of Disaster Capitalism

Henry Rollins: The biggest cause of debt in this country besides mortgages, student debt because there are no jobs out there for these people who trusted their country to be there for them.  They basically did that exercise where you fall backwards and you workmates catch you.  They jumped out of the 40th floor window with that student loan and America went that looks like that hurt.  Suck it up Caroline.  Get a job.  Don’t be a leech.  So would I advise a young person looking at their senior year in high school to become a freshman in college the year after?  That is a damn good question.  How long will it be until America fiscally turns itself around to where the risk of the investment on that student loan to get a person through four years of college?  Will that person get a job where paying off that loan and getting a house and affording a family, will that be a possibility?  In the present America it doesn’t look like it is.

When will that turnaround?  When will that get better?  When will be okay for someone to go I'm going to college?  I don’t know.  I don’t get to push those rocks around, but as it is now there are a lot of really qualified people who are doing jobs fathoms below their ability level.  We are wasting people’s time who put considerable amounts of energy, time and their youth into hitting those books when they wanted to go off doing every else as a young person **** want to do.  They hit the books.  They did what they were told.  They paid and paid and they’re parents paid and they’re not getting the promise of America because those jobs went away and the people who could be in charge of the jobs that went away went away.  So people who could be in upper management there is an upper manager, but he is in Beijing.  He is in Phnom Penh.  He is in Bangkok.  Those jobs went away to please stockholders and so it does not matter how you shift the tax burden around that much.  There are no jobs in this country.  There is just until major industries come back you got what you got and so when you say get a job okay, to get a job your way I'll have to get three of them.  I'll work at the hamburger place until evening.

There is a great story.  I'm sure it’s kind of a folktale.  Some guy told it to me.  A guy goes into his building ever day and he sees the custodian, morning, morning, same guy in the green suit with a broom.  He sees him on the way out.  One night the guy stays late and he is working late, big deadline.  He leaves at like one in the morning.  He sees the same guy in the security officer’s outfit, the janitor guy, some building, different uniform.  So he goes what do you have a new job.  He goes no, this is my other job.  The guy goes down to the locker, gets a dinner break, puts on the other uniform and walks through the rooms he was sweeping five hours before and that’s where a lot of Americans are at.  Some of those people are in college and—sorry, some of those people have a college degree and so you have a country that is undercutting itself for the cheap, quick buck.  They are after the fast high.  They are after the grift rather than going all in on America the long term goal and investment.

If it were me I’d be going like China said, 500 years at a time.  I’d be looking way up the road.  I’d be looking up the road so far my eyes would fall out of my head.  That is how much I believe in America.  That is how much I love America to where I want America like Europe where they’ll educate your kid until his head explodes.  You want to go to college, go, we need you, we need doctors because people grow up and fall down and go boom, everyone is going to need a doctor, let’s have three doctors per floor of every apartment building in this town.  How about that as a good idea?  Like that is a good idea.  Okay, so let’s make college tuition either free or really low and if you have a country full of whip-crack smart people you have a country the rest of the world will fear.  They will not invade a country of educated people because we are so smart we’ll build a laser that will burn you, the enemy, in your sleep before you can even mobilize your air force to kill us.  We will kill you so fast because we are so smart and we will have foreign policy that will not piss you off to the point to where you have to attack us.

The world would be a better place and all the war profiteers and the people who make money on discontent, robberies, the pillaging of economies in other countries they would be screwed and it would be the end of disaster capitalism and so again it’s always down to the education.  As it is now education is kind of this whipping boy.  It is that which gets teased, oh, you’re going to school, where the intellectual, as in the times of Pol Pot and Hitler and Stalin, is seen as the enemy.  Watch Fox News, he is part of the liberal elite.  He is a leader.  And so they fear the polysyllabic word and those who read and write poetry as Hitler did and Mao and Stalin.

We wipe out the thinkers, the people who really do use their First, Fourth and Fifth Amendment rights to freedom and privacy.  We get rid of those people because they are not towing the party line and that’s where your country is at right now.  You have a country that the rest of the world—I forget who said it.  Someone said a couple of years ago the rest of the world is a dynamic place.  That is changing.  That is going with it.  That is following science.  That is realizing that the acidification rates of the oceans have hit full saturation.  They are no longer absorbing CO2.  They are seeing rivers get narrow.  They are watching watering holes shrink in diameter and the only major industrialized country in the world whose not getting with the program is America.

The rest of the world they got it and they’re moving, India, China, all these booming—well booming for now, but these developing and expanding economies.  They see solar energy and America is getting moved on and moved past and that is by design.  There is going to be five people who are going to make out like the bandits they are.  The rest of the people are going to be left flatfooted and it could have been different.  The main question is can things turnaround.

Can this be turned around?  Good question.  I’d like to think so.  I’d like to think that America our biggest virtue would be educating our kids to where they are like these brainiacs.  I think that would be great.  Instead you get people homeschooling their kids and they we have one book because you only need one book, the Bible, that’s the only book they need.  Great, I have a Bible.  I also have a lot of other books.  It’s one of many books that I've spent time reading.  There is the good book.  I have a lot of good books.  Come over to my house sometime.  I’ll show you hundreds of good books.

So I think America is narrowing its opportunities by taking education out of being the main apple of the eye of America’s great future.  Without an education you won’t have a future.

Tim Ferriss: How to Cook Like a Pro in 4 Hours