Alan Alda has earned international recognition as an actor, writer and director. In addition to The Aviator, for which he was nominated for an Academy Award, Alda's films include Crimes[…]
Go to Profile 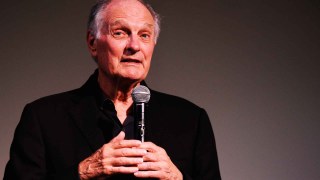 Communication is more than a string of words that gets across static information. The language we use to converse does more than give facts—it can actually offer understanding.
▸
7 min
—
with
Alan Alda

Communication is more than a string of words that gets across static information. The language we use to converse does more than give facts—it can actually offer understanding. Take it from Alan Alda, a career actor whose craft thrives on effective communication through openness and emotional availability. When Alda isn’t on set, he is working to help people communicate more effectively. Through the Alan Alda Center for Communication Science, he helps people understand techniques, like mirroring, that can be deployed to enhance communication. While certain tools of language, like jargon, can facilitate more efficient communication between individuals who share a specialized lexicon, they can also confuse the non-initiated. Alda has summarized his adventures in in the art and science of communication in his book, If I Understood You, Would I Have This Look on My Face?.

ALAN ALDA: Jargon gets a bad reputation for good reasons. But there's something good about jargon, and I think it should be explored because jargon hangs on, I think, in our speech because it has a usefulness.

When people in the same profession have a word that stands for five pages of written knowledge, why say five pages of stuff when you can say one word? And if the other person understands it exactly the way you understand it then jargon has usefulness.

The trouble is we develop such specialized words that they're not understood by people with just a little distance from our expertise. For instance, even show business, which you wouldn't expect to have a technical jargon—or you might not expect it—even show business has it, movie making. “Take this gobo and put it on the Century over there, and hurry up because this is the martini shot. And while you're at it bring me a half-apple.” That's not understood to most people and it's crystal clear to somebody who's been on a movie set for a while. I guess I have to explain it or people will be writing you letters saying “what does all that mean?”

A gobo is a thing that blocks out light. A Century is a Century stand made by the Century Company many decades ago, and their name is on the stand. It's the stand that holds up a light or a gobo. The martini shot is the last shot of the day before you go home and have a martini. And a half-apple is a box half the size of an apple-box that you can put things on, like people who are too short. That's jargon for a movie set. But jargon has another evil use aside from separating us from one another, and that is that when we want to use it to make ourselves look really smart, “I’m smart I talk like this, you can't really talk like this so you're not as smart as me.” A lot of us do this unconsciously, and it's not necessary. We get more done if we open ourselves up.

It's really fun to be on the verge of saying something that is probably not going to be understood by the other person and to say, “wait a second, how can I say this in really plain language?” And if we do that sometimes we learn more about the jargon than we thought we knew. We humanize it, we reduce it to the simplest concepts—what are the concepts that really matter in this?—And then the jargon sometimes gets cleaned off and polished of some of the luster of hifalutin-ness that doesn't help the jargon be helpful.

Choice of words does matter. It matters a lot. But I think that it's important to remember that if all we do is get the right words in our head, and the right order of words, and think that that's going to make all by itself good communication, I think we're missing the boat.

Because really, effective communication is not just because I have something perfect to say to you. It really occurs when you understand and internalize what I have to say and are able to make it your own, to remember it, and that kind of thing.

Here's an interesting example of that. One of our medical students who we were training to communicate better was on rounds with a supervising M.D. and the doctor who was in charge was talking to a patient, and he had to explain to her that she had incurable cancer and she was going to die. And he was talking to her, and as he was telling her all this really hard-to-take information she wasn't asking questions and you could tell by the look on her face, or at least the medical student could tell by the look on her face that she wasn't understanding it. She was just listening with kind of a blank expression.

And the lead doctor says, "Okay so I'll talk to you later," or whatever he said and left, and the young medical student said, "Do you mind if I stay for a few minutes with her and talk to her?" And he was given permission to do that.

So now he sat down right opposite her and took her hand in his, and he started to say many of the same things that the other doctor had said but he didn't use the same words. So the words changed. He didn't say “metastasis”, he talked in simpler terms but he was making contact with her, he was looking in her eyes, he was opening himself up to her as he talked to her. And little by little she started to cry and she started to ask questions, and finally she understood she was going to die and he helped her through that understanding. He helped her get that understanding because she wasn't protected against this barrage of impersonal communication that the other doctor had been giving her. And what he said, what this young the doctor said to us—this medical student—was that it brought him back to one of our basic exercises. It was a mirroring exercise where he had to mirror the movements of another person. And when that happens, well, you get in-sync, and he said, "I was mirroring her and she began to mirror me—because she helped me be a better doctor, because she responded with tears to what I was saying, which let me know she really understood me." He was so moved by the experience that he began to cry himself in the experience.

And I don't think he was crying because he felt her pain at the awareness that she was going to die. I think he was moved because this connection had taken place, and he realized that the movement he had made during the workshops to be able to make this kind of contact with another person was a profound experience, and he said that he would never forget the experience and how it came from the simple mirroring exercise. So that was a wonderful experience for us to hear about, because it was a personal way of letting us know that people can be changed by this.

Hey Bill Nye! Do you believe in free will?