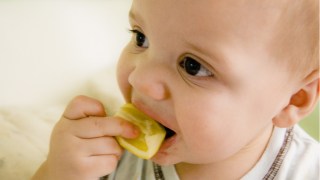 From Tongue to Brain: The Neurology of Taste

A step-by-step explanation of how flavor makes it from our mouths to our brains, as well as a “shocking” interactive experiment for you to try at home.

Question: What is happening on a neurological level when we taste?

Stuart Firestein: So now we can talk about the molecular events that give you this sense of flavor. We’ll start I think, just to be organized if you will, then with the easier one, which is taste, sweet, sour, salt, bitter and umami and those occur on your tongue. There are specialized cells that exist in various places on your tongue. Actually I should point out that more than 90% of the tissue of your tongue has nothing to do with taste. The taste cells, the cells that are sensitive to these various tastes, occupy a really relatively small part of your tongue. But there are various sorts of either receptors or what we call channels, which are able to bind to, which are able to grab a hold of things like salt ions—sodium in particular—or sweet molecules like sugars or bitter molecules or sourness, which is a question of what we call ph, which is due to hydrogen ions. And they’re able to grab a hold of these particular kinds of particles and when they do so they signal through the cell, through the rest of the taste cell. They set up a change in the electrical properties of that cell and that is what is transmitted to the brain through a somewhat-complicated pathway. It's a series of different cells all hooked together that go to a particular portion of your brain and when one of those cells is active your brain says this is salty or that’s bitter or this is a bit sour. And so that is how at least those tastes, those very basic tastes are transmitted to your brain.

Now along with that when you chew food up your sense of smell becomes very important. Our sense of smell is mediated by tissue way up in the nether reaches of the nasal cavity way back up in our nose. It’s a thin tissue, a very thin... we call it an "epithelium," but that just means a very thin tissue that lines a bone way up in your nose here and it has cells in this tissue, which are sensitive to various odors. Now there are two ways odors can make it into our nose. One is by sniffing them up and that’s done of course and that is how we smell things in the room or outside or here or there, but we don’t have such a good sense of smell that way. Well I should make a more careful statement. It’s generally thought that humans don’t have a good sense of smell, but actually we do have quite a good sense of smell when tested carefully. The biggest problem with our sense of smell is that we walk on two legs and all the good odors are 8 or 10 inches off the ground and we have our noses stuck up here at 5 or maybe 6 feet if you’re lucky in the air, where we just don’t come into contact with odors and of course we don’t do certain behaviors that other animals that we think are more sensitive to smells do. I always joke that dogs are supposed to have a great sense of smell, but frankly that greeting thing they do doesn’t really look like a great sense of smell to me. I think you could do that from 10 feet away rather than putting your nose right there as it were, but in any case other animals are willing to put their noses where the odors are, more than we are.

The one exception to that is in the area of flavor and indeed humans have a very, very discriminating palate when it comes to food, much more than many other animals and the reason for that appears to be that as we chew our food we set up a pressure gradient, an air pressure gradient, and we release the molecules in the food that are odor molecules and they go up the back of our throat through what is called unfortunately a name called the retro-nasal pathway, which just means back of the nose really. But in any case this retro-nasal pathway takes the odor molecules that are released by chewing the food and pushes them up the back of the nose and right directly onto to the epithelium in the back of your nose and this is why we then include olfaction as part of flavor, because we get a great deal of the sense of flavor, the quality of a flavor of a substance from the olfactory input.

Question: Is there a way someone might try this at home?

Stuart Firestein:  Take a jelly bean of any old flavor at all. I always find it works best with grape or cherry, but any old flavor at all will do. Hold your nose and put the jelly bean in your mouth while you hold your nose. Continue holding your nose and then chew up the jelly bean, but don’t swallow it. Your sensation will be, if you think about it, will be of a kind of a gloppy sweetness. That is your sweet receptors on your tongue will be working and you’ll know it’s sweet and your feel or touch receptors all in your mouth will catch the texture of it, but it won’t have any of that cherry or grape flavor. Then after you’ve chewed on it for a little while and while it’s still in your mouth just open your nose and actually breathe out. It’s even more effective if you breathe out and I guarantee that you will be shocked to find that suddenly the flavor of grape or cherry or lime or whatever it is appears as if out of nowhere and that I think is a clear demonstration that it’s really in your nose that you catch much of the flavor.

The Difference Between Taste and Flavor