Dr. Eric Kandel is University Professor and Fred Kavli Professor and Director of the Kavli Institute for Brain Science at the Columbia University College of Physicians and Surgeons. His most[…]
Go to Profile 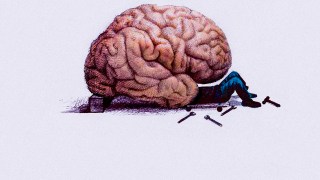 Learning and Memory in the Brain: How Science Cracked Your Mind’s Code

The human brain has become the premier object of study for fields ranging from psychology to machine learning and artificial intelligence. What we know about the brain has expanded greatly in the last quarter century, thanks primarily to a specific method of scientific inquiry: reductionism. As Nobel Prize-winning scientist Eric Kandel explains, this process of breaking apparently whole parts into smaller units gives a real sense of the brain’s underlying mechanisms.

Kandel’s personal story of how he made new discoveries about the brain parallel his own reductionist method: by breaking down the steps he went through, we can better understand how scientific discoveries are made. In this case, they were surprisingly haphazard. Indeed Kandel was not schooled in neuroscience at all. He was primarily interested in psychoanalysis, and in his senior year of school, was given the chance to study the biology of the brain at the National Insitutes of Health.

Once there, he pursued specific methods of breaking down individual brain regions into component parts, observing how individual neurons reacted to stimulus, and how they worked to store memories in the brain. This method — reductionism — revealed to Kandel the difference between long-term and short-term memory, and the plastic nature of the brain itself. His life’s work is an example of the surprising ways scientific discovery can happen, and the creativity involved in reaching new understandings of the world — and ourselves. Eric Kandel:  What reductionism allows you to do is to take a complex problem and focus on one component of it and try to understand it in some detail. And sometimes you can just do it by focusing on one component, other times it requires selecting a particular biological system if you're working in biology, in which that component is prominent or easy to study. And that allows you to study in depth the problem. It will be hard to do if you looked at it in all its complexities.

For me the reductionist approach was really very profitable and not something that I really thought a lot about before. I originally went to medical school with the idea of becoming a psychoanalyst. I didn't have a strong biological background at all. And then in my senior year at medical school there was a five-month elective period in which you could do whatever you wanted to and I thought that even a psychoanalyst should know something about the brain. And so I took an elective in brain science. There were very few people doing brain science in those days, but Columbia had an outstanding person, Harry Grenfist. And I worked in his lab and I worked with one of his associates Don Perpera and had an absolutely spectacular experience.

I mean actually doing science is so different than reading about it. There's a sensual pleasure of doing the experiments; there's the fun of thinking about it coming up with a new finding. I just thought it was marvelous. And Denise and I had just decided to get married and we had dinner one night and I remember saying to her, "You know, I could see doing this for the rest of my life but it's completely unrealistic. You don't have any money and I don't have any money, you know, we want to have kids; I should have a really gone into practice." And she banged on the table and she said, "Money is of no significance." I should tell you sotto voce that in the subsequent 60 years she's not repeated those words very often, but she did say them that night and it made a big impact on me. So I decided to go ahead with science. And when I got out of medical school, which she was in 1956, physicians were being drafted in the service for two years, but if you qualified for the National Institute of Health that served as an alternative to draft duty. So he nominated me, Grenfist, to the NIH, National Institute of Health, and I was selected. So in fact I spent three years there, I spent next three years doing brain biology. And I asked myself what's the central problem in psychoanalysis and I thought memory storage. We all who we are because we remember and psychoanalysis is designed to allow you to relive earlier experiences, earlier memories in a protected environment.

Brenda Miller has shown that the hippocampus in the mammalian brain is central for memory storage. And I had mastered it in Grenfist's lab how to put electrodes into single cells. This is something many people can do now, but when he taught it to me relatively few people could do it, the fact the whole population doing brain science was very small. So my colleague Olen Spence, whom I've recruited to join me on this and I were the first people in the world to record from single cells in the hippocampus. We were euphoric. The people around us thought it was fantastic. Two incompetent people coming to the NIH and the intellectual environment is so extraordinary it brings them up to this higher level. So we studied these single cells to characterize their properties and we saw after a while they were not dramatically different from the other two or three groups of cells that have been described. So clearly learning doesn't reside just in the properties of cells, it should have been obvious in the beginning, it resides in how behavior is modified by learning, how something changes in the neural network.

And we had no idea what the sensor information coming into the hippocampus was. We tried various things and nothing worked. It turns out that space is very important, it's a complex modality. So I realized one needed to take a very different approach, a reductionist approach rather than going to the most complex example human memory, take it very simple. Pablo Thorndike just studied simple reflex behaviors and how they were modified by learning. So I began to look for an animal that had simple reflex behaviors and it was adventitious from a nervous system point of view and that's what led me to Aplysia. It's an animal that has only 20,000 nerve cells compared to the hundred millions of nervous cells in your brain, it only has 20,000. And each of them is gigantic. Aplysia have the largest nerve cells in the animal kingdom. And you can easily put an electrode into any of these cells and be there for 24 hours if you wanted to.

And the cells are not only large they're uniquely identifiable so you can return to the same cell in every animal of the species. Not only that but it turns out that one of the most interesting laboratories, there are only two laboratories working on it, was in Paris. My wife is a Parisian chauvinist so we went to Paris. The alternative was Marseilles, another person was working Angelique worked in Marseilles. Denise said, "Going to Marseilles is likely going to Albany, we should go to Paris," so we went to Paris. We had a great year. And I started to work out a very simple behavior in the animal, a withdrawal reflex like the withdrawal of a hand from a hot object and I showed it could be modified by different forms of learning. And in each case the learning involved a change in the strength of synaptic connections. So nerve cells connect with each other that junctions called synapses and I found that those synapses, they're not fixed but they're plastic; they're modified by learning. Certain kinds of learning causes an increase in strength, learned fear, classic conditioning. Some like habituation learning to forget about something leads to a decrease in synaptic strength.

Later I found there's a short-term memory node. Long-term memory and - short-term memory is a change in functional connections that last for minutes to hours and long-term memory is actually an anatomical change, a growth of new synaptic connections. So I really learned a great deal about this. And then about 1980 I started a second front I returned to the hippocampus. By that time one had a much better understanding. And it turned out that the rules there were pretty much the same here except one is looking at more complex behavior.

Hey Bill Nye! Why Don’t Computers Allow Us to Talk Directly to Animals?