Eric Greitens is a former Navy Seal and the current CEO of The Mission Continues. He is also the author of Heart and Fist: The Education of A Humanitarian, The[…]
Go to Profile 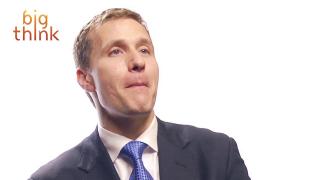 Eric Greitens: Why I Became a Navy SEAL

Former Navy SEAL says the Navy offered him the opportunity “to be of service to others and to lead and to test myself.”

Question: How do you teach young people the non-monetary value that they get from service rather than going to Wall Street?  You made a decision to go into service and then you made that decision again when you came home from the military and you probably could have gone
anywhere you wanted. Why did you make the choices you’ve made and what can we learn from those choices, so far?

Eric Greitens:  So, I had a moment in my life where I had finished my PhD, studying International Humanitarian work.  And I had come to the end of my time at Oxford and I had three choices in front of me.  One is that I could stay at Oxford and pursue a life of great academic freedom.  Another choice was to go to a consulting firm which had offered me more money in my first year than both of my parents combined had ever made in a year or maybe in a couple of years.  And then I had this third option from the United States Navy.

Now, the Navy said to me, they said that if you join, we’re going to pay you $1,332.60 per month.  And they said, if you join, we guarantee that you will have zero minutes per day of privacy in your first few months.  And they said, if you join, from the moment that you sign your name on the dotted line, you’re going to owe us eight years of service.  In return, we’ll give you one and only one chance at basic Underwater Demolition Seal School.  If you make it, then you’re going to be on your way to being a Seal officer and leader.  But if you fail ,as over 80 percent of the candidates do, then you’re still going to owe us eight years and we’ll tell you where and how you’re gonna serve.

Now, in some way, it wasn’t such a compelling offer. But when I thought about that question in my own life, I realized that a university career at Oxford could give me a lot of freedom. The consulting firm could give me a lot of money, the Navy was going to give me very little, but would make me more.  And they were going to give me the opportunity to be of service to others and to lead and to test myself. And so I think that whenever you or whenever we are
facing these decisions in our lives, if we ask ourselves the question, which decision, which path on our journey is going to make us more, I think we’ll always be happy with the choices that we make.

How to Teach Your Child Self-Discipline