Elizabeth Alexander – poet, educator, memoirist, scholar, and arts activist – is president of The Andrew W. Mellon Foundation, the nation's largest funder in arts and culture, and humanities in[…]
Go to Profile 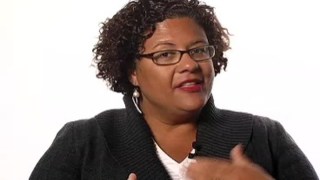 The poet considers race from a linguistic perspective

Question: What kind of language has held us back in talking about raceAlexander:    If you think about, for example, the one drop loss that gave us Black and White people in the first place, right?  One drop… I mean, what kind of language is that, right?  One drop of Black blood makes a person a Black evermore, I mean, that’s rather rigid.  And that for some people, in either some circumstances or in some bodies, there is nothing at all that is fluid and malleable about racial identification.  So I think that it’s an incredibly interesting topics, these systems of classification, what they mean and what is particularly American about the way that it’s played out over several hundred years.

Question: Are we still uncomfortable with the language of raceAlexander:    Yes, I don’t know if that’s really any different from… in the past.  I mean, if you think about all of the different things, let us say, that I more commonly say that Black people only because that was… that is the sort of what I was raised on, right?  I mean, what you start out calling the people who you know who you’re talking about.  You know, just because there’s a press conference in whatever it was, 1998 and Jessie Jackson says, “African-Americans now.”  You know, these things evolve and we cycled through a few things more than once, around the turn of the century, many Black people call themselves [Afro-Americans], one word, you see that on a lot of the intellectual material at the turn of the century so these things cycle.  There’s a poem I love by Gwendolyn Brooks where she says, “I am Black.  I am one of THE Blacks.  We occur everywhere.  Don’t call me out of my name…” the voice of the child and the premise of the poem is that teacher has said, “We are now African-Americans,” but what this child holds onto about being called Black is that he wants to be understood as part of a diaspora of Black people.  And so I think that that’s very interesting as well, you know, how the sense of sort of nation converges with a racial understanding of self.  So these… I don’t think these moment is any different from before and I guess that what I would follow which seems to me to be common courtesy as to call people what they wished to be called.

Elizabeth Alexander on the Importance of Race to the Obama Presidency