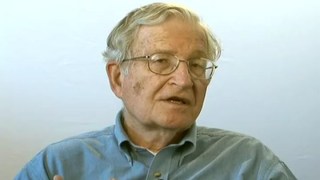 Noam Chomsky discusses the limits of civic participation in the U.S., and the extensive efforts that political and business elites have made to keep it that way.

Topic: The “excess” of democracy

American elites, this goes back to the Constitutional Convention, have been very concerned over what's sometimes called an "excess of democracy." That is, real participation by the public in formulating policy.  In fact the constitutional system was designed to prevent that.  [James] Madison's conception was that, what he called the "wealth" of the nation, the responsible set of men, they're the ones who should set policy.  That's why the senate, which represented the wealthy, was given most of the power in the constitutional system—least responsive to the public and more consisting of wealth.

And there have been battles about this all through American history and of course things have changed a lot since the Constitutional Convention, but the basic theme remains the same.  So, for example, the leading public intellectual of the 20th century, Walter Lippmann, was progressive, Wilson, Roosevelt, Kennedy, progressive.  Now his view, he wrote what are called "progressive essays on democracy," was very influential.  And his view was that the public should be spectators, not participants and that what he called the "responsible people," people like him, the ones who make policy, they should be insulated from the public.  As he put it, they ought to be protected from the trampling and the roar of the bewildered herd, the general public, ignorant and meddlesome outsiders who don't belong in the political system.

That's a very standard view.  This is a version from the progressive sector, but it extends pretty much across the spectrum.

There was an outburst of democratic participation in the 1960s, in fact it significantly civilized the society.  But it caused enormous concern among elites.  There was a major study called The Crisis of Democracy, by relatively liberal elites, basically, for example, the [Jimmy] Carter administration was drawn from their ranks, that sector, internationally.  And they were concerned about the excess of democracy—too much participation.  It's an overload on the state, you can't have all these so-called special interests pressing their own demands.  Who are the special interests?  That’s minorities, women, the young, the old, farmers, workers, in fact, the population.  They're the special interests.

Then there's the national interest, which has to be sustained and that's the interest of the one sector that they don't mention, namely concentrated private capital, which is overwhelming in its influence, but they represent the national interest, so it's okay.  In fact, [James] Madison had rather similar ideas.

That's a leading conception of social and political thought and there's a lot of effort put into instigating it.  That's what propaganda's about.  We don't call it propaganda, what appears in the media and the schools and so on, and you can see its effects.