Major Danny Sjursen is a US Army strategist and former history instructor at West Point. He served tours with reconnaissance units in Iraq and Afghanistan. He has written a memoir[…]
Go to Profile
In Partnership With
Charles Koch Foundation 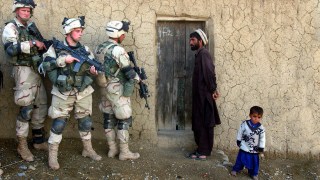 Are lives around the globe just as valuable as American lives?

U.S. Army strategist and military historian Danny Sjursen says Americans don’t value all lives the same. They continually fight people who don’t look like them, making it easier to not care as much about their lives. If the U.S. military is to be truly engaged around the world, it may need to learn how to value all lives equally. NOTE: The views expressed in this video are those of the guest speaking in an unofficial capacity and do not reflect the official policy or position of the Command and General Staff College, Department of the Army, Department of Defense, or the US government.

I’m really interested in this question and I’m glad you asked about it.

This is a question of how do Americans value life? Is every life equally valuable to an American? I would argue it’s not, and there’s some evidence of that. We know precisely how many Americans have been killed in uniform since 9/11. We know the number – there’s a website that will tell you tomorrow what the number is to the last to man. But tens of thousands, maybe even hundreds of thousands of Iraqis, Afghans, Yemenis, Somalis have died, not always at our hands, often in internecine warfare, but we can hardly count. And the American people hardly care exactly how many civilians died in the last drone strike or exactly how many Iraqis died in the course of the civil war.

It seems that the American people are completely disjointed from this war. If they take a moment to think on it, it’s just enough to wave a flag, stick a bumper sticker on their car with a yellow ribbon, maybe stand for the pledge and clap for the latest service member on the field in the NFL.

Most Americans aren’t paying any attention to the military. And I’ll say I think one reason why this is, one part is race. There’s no denying it. This is very uncomfortable for people to deal with, but we fight brown people. Usually we fight Arabs, we fight Pashto in Afghanistan and other ethnic groups. These people don’t necessarily look like the traditional American, and so their lives have less value.

How do we know this? When there was a terrorist attack in Belgium and, say, 20 people are killed, well those are Europeans; they kind of look like Americans. It’s days of coverage. Every single individual face is on the screen even if they’re not American citizens. Every Caucasian face is accounted for when there’s a terrorist attack, and it’s the narrative or for days, which is hard to do in this news cycle. But what about the next day, when 140 people are killed in Turkey in a terrorist attack, also perpetrated by ISIS, also perpetrated on innocent people?

We will never see the faces of those Turks. We might not even get the exact number. They’ll say, “Approximately 140 people were killed in an attack,” and it’s going to be on the Chyron.

And so I think we have to ask ourselves a question, which is: if America is truly to be engaged around the world, as we are, with hundreds of military bases abroad—we’re the only people who do this by the way—if we are to be so engaged in the world then I can’t help but wonder if we ought to be more sensitive to the value of life in the regions of which we are either occupiers, invaders, or humanitarians, depending on your point of view. I’m not even going to necessarily weigh in on that, I think it’s a little bit of both or a little of all.

But I think you bring up a great question, which is: American lives clearly matter, but if we truly believe that all lives matter, we sure don’t act like it in the media space. And that disturbs someone like me who grew to love Iraqis and Afghanis, especially Iraqis, who were the first people that I really dealt with in uniform. And I fell in love with these people. Because you know what most of them want to do? They want to wake up; they want to go to work; they want to take care of a family.

And they’re innocent. They’re as innocent and as valuable as we are as Americans, and we’re in their countries. We are guests, often uninvited guests, but we are guests. And I think it’s really important to value life there. I don’t think we do enough of it at home—or abroad.