Establishing cultural rights to protect diverse groups may not be the answer.

CHANDRAN KUKATHAS: One of the issues that arises I think for liberals generally and for classical liberals included is how to deal with the fact of cultural diversity. And this may exist in part because a society is religiously diverse but it may also be because it's diverse as a result of ethnic variation and the fact that a society is one that has multiple cultural traditions in operation within it. In societies like say the United States or Australia some of these traditions reflect the colonial origins of the society so you may have native peoples who have very different cultural traditions. But also because of immigration over the years there may be cultural diversity as a result of this. Now one response to this has been to say well what we need to do is to protect this diversity by establishing cultural rights of some kind. That is to say to recognize that people have rights to some kind of cultural protection to make sure that they can, in fact, live according to their own cultural traditions. Now I think this is a difficult solution to defend in some ways because while on the one hand it's good to recognize that diversity and to allow for different kinds of ways to flourish, one of the problems is that it assumes in a way that when we say that there are cultures that exist we're assuming that they simply somehow exist naturally and they exist independently of the kinds of rights and protections that exist.

Whereas, in fact to some extent cultures and traditions also exist because of particular kinds of norms or rights, laws that are, in fact, in operation. To give you a kind of almost trivial example or a hypothetical example imagine that a law was passed that said that anyone of Portuguese-Mexican descent in the United States would be entitled to fee college education. I suspect that everyone who's got even the slightest hint of a Mexican or Portuguese background will go looking for it and try to say yes, I belong to this particular group. But absent that particular entitlement this group wouldn't have any real existence. It's there partly because of the laws that have come into place. And we can find more particular examples of this kind of thing in societies where the laws have changed to recognize different kinds of ethnicities and so on. The recognition of an ethnicity may mean that a certain ethnicity then comes into existence or comes into prominence. So I think to try to say what we've got to do is somehow protect particular cultures is a difficult thing to do because that itself may give rise to the existence of particular cultures.

Now that said I don't want to deny that some kinds of traditions and cultures have a very, very long history. I mean, for example, the Jewish people don't exist simply because someone has made a rule that says if you're Jewish you get all these advantages. They have a long history. Similarly there are other traditions, religious and otherwise, within a society that exist not because of very specific laws that are created. Here the question is okay, how do we make sure that people from different kinds of traditions and cultures do get some kind of protection without making that protection too explicit. Because as I said one of the problems is that making an explicit can give rise to particular entities that don't exist except for that protection. But also when you give an entity a kind of protection what you're also doing is you're not just protecting something that is somehow a natural thing that belongs to the whole of the culture or the tradition. What you're doing is you're also granting a certain amount of power to those who are the leaders or the dominant class within those groups.

And so they're the ones with whom you'd be negotiating and discussing and seeking accommodation. So what you're doing is you're really giving them power over their own populations. And that's something that you might want to be wary on because those groups themselves might have within them smaller groups that might also be wanting to be independent or tolerated or given some kind of protection. So protecting one kind of group may mean that you advantage one group to the disadvantage of internal groups. So from my point of view as a classical liberal I think the answer is to allow for the accommodation of diversity and difference by essentially saying look, we don't recognize any group or tradition as somehow having the right to be protected and preserved, but neither do we recognize the right of anybody to suppress them, to dominate them, to stop them from forming, from living together and so on. But that does mean that those who want to dissent from those groups are also free to do so. They can't be forced by the groups within which they find themselves to conform to those particular norms.

So in a sense what it's doing is applying a kind of principle of hyper tolerance to everybody. We accept that you can go live your own lives in the ways that you see fit, but we don't recognize your right to force other people to live according to the way you see fit. And that's how I like to think about the classical liberal response to the problem of cultural diversity. 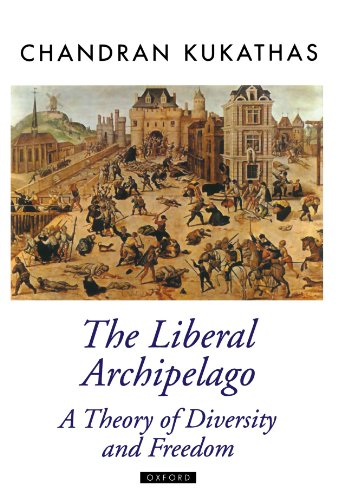