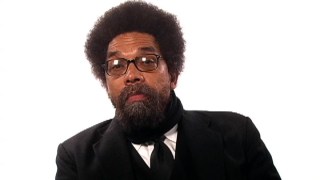 The President’s failing is that he is “mesmerized” by brilliant men who are too cozy with Wall Street.

Question: Have Obama’s policies helped out the working class?

Cornell West: You know, when I talk about the symbolic victories, black man in the White House, precious black family in the White House -- I mean, the legacy of white supremacy in America -- you can't help but celebrate. I told that brother I was going to break dance, which I did, but only in the afternoon. The next morning I woke up a major critic: how do your policies relate to poor and working people? But you have to break dance in terms of that breakthrough, because racism is real, and it has an ugly and vicious history in the country. So for him to be in the White House is quite significant symbolically.

At the level of substance, what kind of policies? If you're going to bail out investment bankers, if you're going to have public options negotiable and make deals with greedy drug companies and pharmaceutical companies before you even have a substantive debate on health care, then it's clear you're not tilting toward the poor and working classes; you're tilting toward the well to do. And I'm afraid sometimes that my dear brother Barack Obama is too mesmerized, not just by Wall Street; he's mesmerized by braininess of those who are on intimate terms with Wall Street. My dear brother Larry Summers -- brilliant, brainy -- tied into a Wall Street Weltanschauung and a Wall Street worldview, cronies, best friends, comrades tied in to hedge fund communities and so forth. So that we can always applaud his brilliance, but brilliance and braininess need to be tied to a framework that puts poor and working people at the center.

This is why they can celebrate recessions -- oh, recovery's set in. For who? Wall Street? Yes. Everyday people, escalating unemployment, underemployment, much of which they don't even count, as you know, you see. But that's what -- when you have a neoliberal framework, jobs are a second thought, working people are a third thought, poor people not even on your radar screen. So we need to have voices out there that are very honest and candid about those persons who have been thoroughly left behind during the age of Reagan, and of course having a longer history in terms of issues of race and class and empire and gender and my gay brothers and lesbian sisters. They're important.