Chuck Close is an American artist noted for his highly inventive techniques used to paint the human face. He is best known for his large-scale, Photo-Realist portraits.In 1988 a spinal[…]
Go to Profile 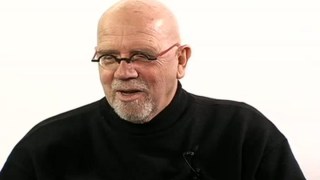 Chuck Close on the passion of Brangelina.

Chuck Close: After a kind of unfortunate start in which his handler, in an attempt to protect him, wrote an unbelievably stupid contract and I said, “Obviously, you don’t know how this thing works.”

Brad [Pitt] was very, very embarrassed that the people around him were asking him for all this stuff. And he contacted me and he said, “This isn’t me, I didn’t do this. I know you’re work, and I would just like to be photographed by you.”

So, we spent the day together and I found him to be a very interesting guy. I think a person of, speaking of integrity, a person of very high integrity, and a person with real passion for his work, but also a passion for the things that he believes in, causes that he and Angelina [Jolie] are involved with. It was a real pleasure to get to know him.