As a young man, Bryan Cranston spent almost two years traveling the country and figuring out what he wanted to do. It helped shape who his is more than any other time in his life.

Bryan Cranston won four Emmy Awards for Outstanding Lead Actor in a Drama Series for his portrayal of Walter White in AMC's Breaking Bad. He holds the honor of being the first actor in a cable series, and the second lead actor in the history of the Emmy Awards, to receive three consecutive wins. In 2014 he won a Tony Award for his role as Lyndon Johnson in the bio-play All the Way. In film, Cranston received an Academy Award nomination for his leading role in Trumbo. Among his numerous television and film appearances, he was nominated for a Golden Globe and three Emmys for his portrayal of Hal in FOX's Malcolm in the Middle. He is the author of his memoir, A Life in Parts.

Bryan Cranston: You know Americans have a lot of great qualities, and one of them is a general work ethic. I think we’re a nation of hard workers.

And that being said I think sometimes we reach down too far into our youth and expect them to produce sooner than they should be able to.

I think people gain a tremendous amount of wisdom when they travel, when they wander—when they allow themselves, as I did, to get lost. And maybe you’ll find yourself somewhere. Or at least traveling forces you to be social. You have to get directions, you have to learn where things are, you’re attuned to your environment, you have to be more careful about the weather and where you’re lodging is going to be, where you’re going to eat, how you’re going to get from one place to another.

When you’re there what is it you want to see? How can you find a place for you to actually just rest? It’s an experience like no other. I love to travel and I enjoy not knowing where I am. It’s an unusual thing. I’d purposefully teach that to my daughter, who’s now 24 years old, to not be afraid of not knowing where you are. So I’ll go for a drive or go for a walk in a different city and my wife will say, “Do you know where you’re going?” “Not really. Just kind of exploring different places.” As long as you have a sense of direction you’ll find your way, you’ll figure it out. And I do that in foreign countries as well: Just kind of wander and meander and trust that you’ve paid attention to at least the basic requirement of where you have to get back to in order to find your way home.

But I think it is, I think we look down now to 16 year olds and say, “Where are you going to go to college? What are you going to do for the rest of your life?” And it's like... they’re not fully baked yet! How do they know? Give them a break.

Just say, look, “I think after high school take a year off, take two years off. Join the Peace Corps. Travel. Go figure things out or just enjoy yourself.”

For the first time in their lives they’re adults and they don’t have to be somewhere. They’re not told to be somewhere. Get used to that freedom. Get used to having the need to self-govern yourself, to be able to employ self-discipline—or not. Or you realize “Oh my god, I’m really slovenly! If I’m not told I need to go to class I don’t go.” You might discover something about yourself.

“I need order. I need that. I like that.” Some people love to be, say, “this is where you have to be and this is what you need to do.” Are you that type of person or are you a type of person that wants more freedom in your life? And I think exploration, travel, it provides that.

In 1976 I had just finished my second year of college and realized that, after an experience in an elective acting class, that I wasn’t going to be the policeman I thought I was going to be. It was better if I didn’t continue on with two more years of an Administration of Justice major because I knew I wasn’t going to become a policeman.

So... I thought I better just go figure out what it is I want to do.

And so I hopped on the back of a motorcycle. My brother was in the same position, really. Two young guys who were not quite sure what was in store for them or what avenue they should go down. So we both hopped on our motorcycles and we took off. We left California. I had about 150 bucks in my pocket or something. And soon ran low of funds and we had to get jobs along the way.

What was great about it is that we had total freedom. We didn’t know exactly where we were going. We didn’t know how long we were going to stay in any given town. If it appealed to us we would stay and explore different places and historical sites. If it didn’t appeal to us we took off again. We slept on golf courses and cemeteries, back of mortuaries, schools. Anywhere we could throw a sleeping bag—an old patch of grass—and that was our home for the night. And I was 19, 20 years old. It was fun, and you could do that then.

And that’s the time you want to do it. That’s the age you want to do it. And in retrospect I realized that I took off on this trip, which lasted two full years, in an effort to allow myself to get lost, to be lost, and to figure out while I’m gone what it is I really should be doing with my life. So I finally determined it was something where I wanted to allow myself to get lost so that I could be found, basically is what it was.

And after two years it was during that trip that I had an epiphany that I really wanted to become an actor and do everything I could to put myself in a position to make a living and be a professional actor for the rest of my life.

Travel—and experiencing other cultures—opens your mind. Nobody knows this better than Bryan Cranston, who spent two consecutive years (at 19 and 20) on a motorcycle with his brother, exploring America and figuring out what it was that he wanted to do with the rest of his life. Needless to say he became a major figure in American acting. With pivotal roles in Breaking Bad and Trumbo that—no exaggeration here—have helped reshape not only American television but American masculinity, it shows just how meaningful being purposefully lost can be. That way: you can truly find yourself. Cranston's book is the spectacular memoir A Life in Parts. 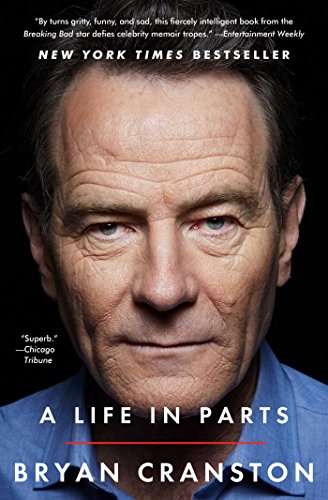 Travel—and experiencing other cultures—opens your mind. Nobody knows this better than Bryan Cranston, who spent two consecutive years (at 19 and 20) on a motorcycle with his brother, exploring America and figuring out what it was that he wanted to do with the rest of his life. Needless to say he became a major figure in American acting. With pivotal roles in Breaking Bad and Trumbo that—no exaggeration here—have helped reshape not only American television but American masculinity, it shows just how meaningful being purposefully lost can be. That way: you can truly find yourself. Cranston's book is the spectacular memoir A Life in Parts.

When Alexa replied to my question about the weather by tacking on 'Have a nice day,' I immediately shot back 'You too,' and then stared into space, slightly embarrassed.