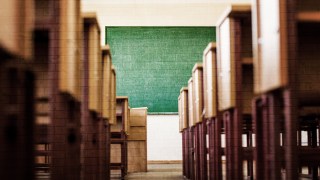 In this latest installment of 7 Days of Genius, brought to you by Big Think and 92Y, everyone’s favorite Science Guy chats with Jake Roper of Vsauce3 about the importance of science education in ensuring future generations remain creative, experimental, and evolutionarily competitive. Science education empowers students, says Nye. It fuels our curiosity in a way that is essential for the long-term survival of humanity.

Jake Roper: Hello. I am Jake Roper from VSauce and I'm fortunate enough to be here with Bill Nye, The Science Guy. And we are here because of 92nd Street Y's 7 Days of Genius in collaboration with Big Think. Thank you for being here.

Bill Nye: Oh no it is I who must thank you. It's great to be here.

Jake Roper: How do you see yourself bringing out genius in youth, in kids because you've done that for so long?

Jake Roper: I think so. I grew up with you and look at me now. Here I am.

Bill Nye: A genius. No, well, you want people to try stuff. You want people to not be afraid to experiment. And so I always say about science education is it's empowering. When you learn about the world around you, you learn about nature and then have you fit in, you'll try things. And I think that's really — it's kind of how we got YouTube and Big Think and the Internet is people just trying stuff.

Jake Roper: Yeah. Because we're all just, I think, as human beings just inherently curious. We want to find out...

Bill Nye: Oh I claim, I'll claim Jake that our ancestors who were not curious never became our ancestors. They got eliminated. Human curiosity is how you discover things and that's how we innovate. That's what keeps humans in the game. I mean look, we live all over the world. We're in Manhattan. I know this is airing in March; was a cold winter. Several days you wouldn't want to be outside without some clothing and so that all comes from being able to wander because you had the equipment to try it.

Jake Roper: And do you think at any point that maybe our curiosity has dwindled a little bit?

Bill Nye: Well, this is everybody's concern in science education. “If we can put a man on the moon, why can't we whatever it is? Why can't we address climate change?” Most of the patents that are issued are issued to people under 26 years old. Innovation comes especially when you're young. I mean the other half are people over 26, but it's an important thing to get people excited about science and feeling that they can create before they're older.

Jake Roper: So when it comes to informing and educating kids, do you think there is a divide between discipline and play? Can they kind of go together?

Bill Nye: Well, you want the right balance. It's the same old thing. Let me tell you, you cannot teach elementary school without recess. I'm not kidding. You ask any elementary school teacher if you take away recess thinking you're saving money as a school board member or whatever it is, you're messing up. No, kids have to have recess. And so what you want is this balance between creative time, working on a project, and the discipline of learning things that you have to know. Like it would be really hard in our society to never learn the alphabet. To insist that the alphabet — I never really learned that; it's just rote memorization. I mean you might be able to do it, but it would be really hard. And the example I always give you for the difference between just trying things and discipline, three words, algebra. Wait, that's one word. Algebra.

So algebra is the single most reliable indicator of whether or not you'll pursue a career in math and science. This is to say it is not clear that it is cause and effect. It's not clear that algebra causes you to accept science as a career or embrace science as a career. But apparently, and this is people speculate this, papers are written, neuroscientists go crazy for this, thinking abstractly about numbers with letters, let's say, helps you think abstractly about all sorts of things. And to all of you out there who are trying to learn algebra, you have to practice. I'm sorry, man. I did too. I mean I was pretty good at it; I was not the world's best. I'm sorry, when it comes to math you've got to practice. You have to memorize the alphabet. I'm sorry people; it's just how it is. That's the balance you want. And what I think makes a good instructor, a good educator, a good teacher is somebody who has a sense of when to let kids mess around and when to have them buckle down. Easy for me to say.

Jake Roper: Well, it's a good point because an interesting thing with specifically algebra, even with just with a lot of the sciences, that it's a physical thing; you're physically doing things. Be it typing numbers into a calculator like writing things down or grabbing a compass out, like you're actually…

Bill Nye: Using your brain and your hand.

Jake Roper: Using your brain and your hands. So when you go with practice it is kind of like learning the violin or playing a sport. It's that you need to rehearse.

Bill Nye: You have to practice and practice. And you have to accept as a student and a teacher and a parent that there's just times where you have to buckle down and practice. And there's other times where you have to mess around. You have to just try things. And that's really what has, this is my interpretation, what has kept the United States in the game is the education in the United States still, especially at the top levels, still has this combination of learning the facts and just jump in and try it. And we don't want to lose that. Nobody in the world wants the U.S. to lose that by the way.

Arianna Huffington: Mindfulness Taps into a Childlike Wisdom and Wonder