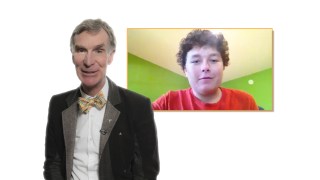 Hey Bill Nye! Is Art as Important as Science?

As a science educator, Bill Nye the Science Guy has needed artistic conventions to communicate knowledge and information to his audience. That's just one reason why we need art, he says.
▸
2 min
—
with
Bill Nye, The Science Guy

The American education tradition is firmly rooted in liberal arts and the sciences, though increasingly calls are being made for STEM education. Whether this comes from economic concerns or from purely educational ones, we don’t want science at the exclusion of art, or visa versa, says Bill Nye the Science Guy. As a science educator, Bill Nye the Science Guy has needed artistic conventions to communicate knowledge and information to his audience. That’s just one reason why we need art, he says.

Theo: Hi Bill. My name’s Theo. I’m 13 years old and I’m a huge fan of your work. I want to know if you think art is important. And if art is important, is it as important as the sciences? Thanks.

Bill Nye: Theo. Theo you’ve got to have art. We have to have art. We have to have science. I will claim that science is the best idea humans have ever had but, I mean, I’m a science educator. You would expect that from me. But I listen to music all day. I make up lyrics for songs all day. When I make a thing, which I like to do all the time, a tinkerer, I like the thing to look good. And I have done standup comedy telling jokes in an effort to get people to think about us, ourselves, our relationships to each other, our society. These to me are all forms of art that I participate in. I shudder to think what my world would be like without other artists contributing which would not be nearly as good. You have to have both. But what I encourage everybody is, you don’t want to have one to the exclusion of the other. You want to have both – science and art. However, science has affected our society dramatically.

What’s the most significant invention ever? It might be a sewer. Without sewers we would just not have as good a life as we have right now in the developed world. And that’s based on science. Roads, cars, this computer, this video interaction that we’re having. That’s all enabled by science. But you want the background to look good. You want my tie to look good. Whoever made my tie was an artist and I’m glad that he or she was out there doing this piece of art. So you’ve got to have both man. Don’t take one or the other. And don’t use it as an excuse not to learn algebra.

How to Think Critically About Islam Without Denigrating Its Practitioners