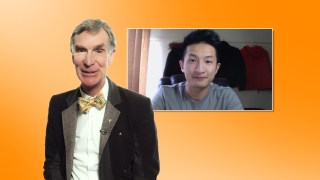 Hey Bill Nye! If Humans Colonize Mars, How Will We Evolve?

Colonizing Mars is a romantic notion but if it was possible, how would our bodies hold up and how would future generations evolve on a lower-gravity planet?
▸
5 min
—
with
Bill Nye, The Science Guy

On July 30th, 2016, Cracked.com released a short animation on its Youtube channel explaining why space travel is one of the worst things that can happen to the human body. Though Star Trek calls it the final frontier, it is not a frontier that is begging to be travelled. Space is hard. Unlike going out on a hike, when something goes wrong for an astronaut, it goes deadly wrong. There is no army to send for back up, it is not a wave pool that one can just walk out of. If there’s a crack in the ship, the human body is in for it.

And even if the ship that takes us to space works perfectly, there are other problems. As Cracked points out, “Space will destroy your body.” In simplest terms, staying in zero gravity for too long causes many medical problems, from blood collecting behind the eyes, a skeleton that is slowly falling to bits, and a spherical heart. So staying in space for any long-term period isn’t a healthy idea.

But there is the dream of colonizing another planet. Bill Nye, science educator and author, has a few precautions about actually taking on Mars. It could be similar, but many times worse, to the base currently in Antarctica. The cold continent is very hard to live on. Despite the penguins and seals that readily live on the shores, there are huge chunks of it that haven’t had precipitation in a hundred years, it’s just a blank place with no food or water. That would be like living on Mars, but with the singular bonus of having gravity to prevent the Charlie Brown Effect that astronauts deal with. Nye also refers to an upcoming film, called The Space Between Us, which brings up a pretty decent point. If someone were to be born on a planet like Mars, many things could happen to that body, including a heart of a different strength, which would make it difficult to ever come back to Earth. Bill Nye doesn’t see Mars colonization happening, but even by an enthusiastic estimate, we’re way off being able to inhabit the red planet.

Victor: Hey Bill. My name is Victor and I’m from Markham, Ontario. The question I have for you this Tuesday pertains to human evolution and space colonization. I understand that humans are constantly evolving to adapt to the environment around us. For instance astronauts who have gone on long expeditions need to be carried out of their spacecraft after returning back to Earth. So what kind of evolutions do you think we might see in humans if we colonize a planet with lower gravity like Mars? Thank you.

Bill Nye: Victor, Victor, Victor. This is an excellent question and I appreciate you asking it. Notice that it is my strong belief that we will not colonize Mars. It’s a very romantic notion. You live in Ontario. I don’t know but it looks like your ancestors came from the west, the left coast of Canada and a lot of people who first colonized Canada were from Europe. And we have this vision that you leave your native country because you’re getting religiously persecuted or someone is making you a good deal on going to a new world where you can start a new life. And the people that came to North America from Europe thought this was great. They were going across North America eating everything, foraging in the forest, cutting down trees, making farms, finding all these remarkable natural resources, especially in Canada all these wonderful mineral resources.

And they had a fabulous life. But everywhere they went there was water and most especially they could breathe. That is huge. And I say to everybody who thinks that everybody, he or she who wants to colonize Mars, colonize Antarctica. See what you think. No, no, no, no. None of this going to the seashore where the penguins are swimming and the orca are eating the seals and there’s krill for the very large whales. Go to the dry valleys where it barely gets close to the freezing point of water when there is water. It hasn’t snowed or rained in a century. There’s nothing to eat. And see what you think really. See if that appeals to you. Yes, humankind has a base in Antarctica populated by hundreds of people, many of them are scientists and they’ve made important discoveries about planetary science, about the Earth and our environment and climates and so on. But Mars is a really just inhospitable place. With that said there’s a movie coming out called The World’s Between Us where a kid is born on Mars apparently surreptitiously a pregnant woman ends up on Mars against all protocols or whatever science fiction things they had to put in there to get her there. And the kid grows upon mars and he ends up, eventually he comes to the Earth and his heart isn’t strong enough for him to carry on. He can’t jump and of course he falls in love with an Earth girl and there are some issues that you always have when Earth boy comes from Mars.

I mean Earth ancestor boy comes from Mars to Earth there’s some problems because he can’t run or whatever. It’s like boy in the bubble. So it might be a cool movie. I’ve only seen a portion of it but it’s called World’s Between Us which addresses your question I think from a science fiction standpoint. Then when you say well how will humans evolve. Humans are evolving but boy it’s hardly noticeable. You know humans are all over the earth now and I say all the time they run this test continually Victor. Humans from different parts of the world have sex with each other and produce more humans. But you still end up with a human. So I’m not sure humans would evolve much on Mars unless there really was selection pressure. Only women that could handle the Martian gravity, only the offspring that could handle the Martian gravity would do well. Only the human offspring that could handle ultraviolet light perhaps or could handle bitter cold. Even when you have a spacesuit there might be cold extremities – your fingers and toes and stuff.

But that selection pressure would be really slow. And I just say all the time a science base on Mars, yes let’s go. A science colony, I mean a human colony where your families are going to retire or raise kids and build playgrounds, that’s a lot harder thing. But you’re asking a great question Victor. Look at the movie and see what you think. Carry on.

Down with Multitasking: Increase Your Productivity (and Charisma) by Mastering Singular Focus