Why Silicon Valley wants to automate 3.5 million blue-collar truck drivers out of existence.

Andrew Yang is an entrepreneur and author who is running for President as a Democrat in 2020. In his book The War on Normal People, he explains the mounting crisis of the automation of labor and makes the case for the Freedom Dividend, a Universal Basic Income of $1,000 a month for every American as well as other policies to progress to the next stage of capitalism.

ANDREW YANG: The big misconception about the impact of technology in the workforce is thinking that it's around the corner. Instead it's been with us for years. If you look at the last 20 years or so, we've automated away 4 million manufacturing jobs in Michigan, Ohio, Pennsylvania, Wisconsin, Missouri, Iowa, all the swing states that Donald Trump needed to win in 2016 and did win.

Then my friends in Silicon Valley and my friends who work in technology know that what we did to the manufacturing workers we are now going to do to the retail workers, the call center workers, the fast food workers, the truck drivers, and then even bookkeepers, accountants, insurance agents, lawyers, and on and on through the economy. So what happened to the manufacturing worker is a very clear sign of what's going to happen to these other workers moving forward.

And I talked a little bit about retail workers, the most common occupation in the economy. Thirty percent of Main Street stores and malls are going to close in the next five years because Amazon is soaking up $20 billion of commerce every year. And many of these workers are making $11 to $12 an hour and don't have a huge savings cushion to be able to make meaningful adjustments. Being a truck driver is the most common job in 29 states. There are 3 and 1/2 million truck drivers in this country, average age 49, 94% male, average education high school or one year of college. They're making about $46,000 a year right now. It's one of the higher paying blue collar jobs in this country.

And on the west coast, you have my friends in Silicon Valley who are trying to automate truck driving. And the reason they're doing that is because of the money -- $168 billion in financial incentives for automating away truck drivers. And that's not just labor savings. That's also equipment utilization because a truck never needs to stop whereas human-driven trucks have to stop every 14 hours; fuel efficiency because trucks can convoy together in lower wind resistance and so robot trucks would be able get places with less fuel, fewer accidents because truck drivers right now kill about 4,000 other motorists a year in accidents and that number would come down if you had automated freight. So there's a very, very powerful set of incentives to try and automate truck driving as an occupation.

Again, though, you have these 3 and 1/2 million truckers, and only 13% of them are unionized. So there's not going to be a grand negotiation. So imagine being a trucker who's taken out $50,000, $60,000 loan to lease your truck and it's your livelihood and your means of support, and then all of a sudden, you have to compete with a robot truck that doesn't need to sleep. And that is what is around the corner for hundreds of thousands of truckers in this country in the next five to 10 years when robot trucks start to hit our highways. And Amazon is testing out robot trucks as we speak, right now in the Midwest. 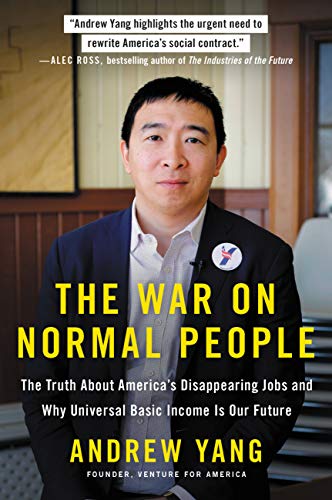 The War on Normal People: The Truth About America's Disappearing Jobs and Why Universal Basic Income Is Our Future
List Price: $16.99
New From: $10.13 in Stock
Used From: $9.72 in Stock