Carmen de Lavallade has had an unparalleled career in dance, theater, film and television beginning in her hometown of Los Angeles performing with the Lester Horton Dance Theater. While in[…]
Go to Profile 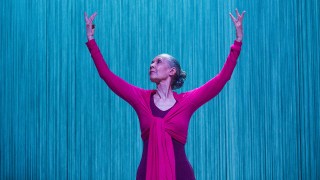 For over 60 years, dancer Carmen de Lavallade has performed worldwide in collaboration with legendary artists such as Josephine Baker and Duke Ellington. Still performing in her 80s, Ms. de Lavallade is currently touring an autobiographical show called As I Remember It. The production features Ms. de Lavallade performing with projections of her younger self as well as with films featuring some of her significant collaborators. Stories of her years in California dancing with Lester Horton, in New York with Alvin Ailey and her time spent as a member of the Yale Repertory Theatre frame the evening. In this Big Think interview, Ms. de Lavallade recounts the process that led to show’s development.

Carmen de Lavallade: My show As I Remember It is not necessarily a dance piece and it’s not a theater piece. It’s a combined piece of theater and — I can’t say dance. I really at this time of my life I move, which is true. No, I have to be honest about this. The idea has been kind of brewing for a long time and I realized I wanted to talk about my journey and the people, the interesting, wonderful people who pass through my life and who made me who I am from — my parents and my teachers and the people that have come into my life. And the places that changed me like, of course, I grew up in Los Angeles, California, I think in a really interesting time. In the '30s so that was a difficult time for a lot of people to live, like Depression babies. And then when I get to New York it was in the '50s which was a wonderful time I think. It was really Oz for me. And then New Haven, which was a — where my whole life changed again because by the time I got to New York, I was mainly a dancer. But when I traveled to New Haven, it became a whole new world with the theater.

The theater and the dance for me, collided for me because I found out I missed — that was something I was missing in the dance world because it’s really like being in the military. It’s very regimented and then at the same time I was very fortunate that my mentor, Lester Horton, was anything but regimental. He was an incredible combination of human being. He had a dance theater, which means it was not a studio. It was a real little theater on Melrose Avenue. And you work with no bars and no mirrors. Your workspace was the stage. It was a small theater that had about 10 rows of seats and you had to learn to do everything. We had to help make the costumes. We had to help with the sets. We had to help change the lights at the performance. We did everything. And even afterwards you had to help clean up after yourself. So it taught you to be independent and it made you think and it kept you grounded I think. You know some kids — where’s my costume or where’s this? No, no, no, no, no, no. We didn’t have that. And to a person that worked in that theater with Lester, we’ve all been grateful, always been able to take care of ourselves.

And I found that later in life no matter what situation I walked into I could size it — I know how to size it up. I know what to do. If I get in trouble I’ll do it myself. And it has to this day I’m still using some of that experience so that when I got to New York City and joined House of Flowers, which was a Broadway — that was a new experience. That was a challenge. As we had the challenges of the dance theater.

And then from there to go to Yale it was — oh, I knew everything about the theater itself. What I had to do was take care of the voice and being around actors who are totally different than dancers, who are freer. I was so fascinated by them because they had a reason for everything that they did and they would break down characters and tell stories about a character that wasn’t even in the script. And I found that fascinating so that when I went back to the dance I thought oh, why are people turning when they’re — what is that for — I was questioning. So that when I went back to maybe choreograph for myself or even work with somebody I’m already thinking in terms of character, but I could always find a way to find a reason for myself that I can make it into something that I could feel comfortable with, if that makes any sense.