A. O. Scott joined The New York Times as a film critic in January 2000, and was named a chief critic in 2004. Previously, Mr. Scott had been the lead[…]
Go to Profile 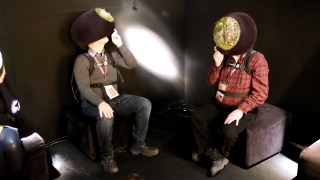 How Virtual Reality Will Supplant the Film-Going Experience

Chief film critic A.O. Scott discusses how virtual reality may change the movie-going experience. People have predicted the death of cinema over and over, he says, but people still love going to the movies.
▸
3 min
—
with
A.O. Scott

Technological change has happened increasingly quickly in the film industry. First sound, then Hollywood, then color. When the television set entered the culture, everyone predicted the end of the big screen. What happened instead were a series of innovations to the film-going experience itself. New York Times Chief Film Critic A.O. Scott discusses how virtual reality may change going to the movies, taking a community experience and creating a more individual revelry.

A.O. Scott: The question is kind of how virtual reality will interact with or supplant or challenge the theatrical experience because that has proven very durable. The end of movie going is something that's been predicted since the first television set rolled off the assembly line, pretty much, and has accelerated in recent years. This idea well people are just going to stop going to movies. There is going to be something at home that's going to be so great, maybe it will be goggles or maybe it will be a big TV that no one is ever going to leave the house and going to the movies again, and yet people do. And I think people still will. And if some enterprising producers or filmmakers or technology companies can figure out how to integrate the VR experience into that that could be really interesting. It could also be really strange. I was at a screening of the virtual reality stuff for the Times Magazine and there were a bunch of people sitting in rows of chairs and they were all going like this with their little goggles on. It was really weird. Instead of all looking at the screen they were all kind of kind of together in a theater but in their own little enclosed bubbles.

One thing that's true about movies or about motion pictures, let's say, is just how constant and how rapid the technological change has been. I mean the movies have been a different thing every single decade of their existence and it's remarkable to look at how fast they moved from the first Edison and Lumiere shorts to the large scale silent features by Griffith and Chaplin and von Stroheim and the others. And then there's sound; then there's Hollywood; then there's color; then there's television; then there's wide screen; then there's 3-D; then there's digital. I mean it happens really, really quickly and at any point it's hard to predict what it's going to look like. And I think it's a matter of the artists figuring out what to do with it. I mean there's this new technology and the one thing that I'm sure of is that the early experiments with it that look kind of so cool and so futuristic now will, a few years from now, look so bizarre and antiquated and strange.