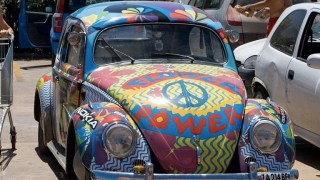 Environmentalist and author Stewart Brand helped define the 60’s. What revolution would he advise young people to start today?

Question: Have the ‘60s done their work, or do we need a new counterculture?

Stewart Brand: I would love to see a counter – well in a way, the Whole Earth Catalog was part of the counterculture and treated by some as a kind of leader in the counterculture, but it was also a counter-counterculture phenomenon in the sense that a lot of the hippies of the time were a sort of eschewing technology, eschewing intellectual endeavor, but they were paying attention to people like Marshall MacLuhan and Buckminster Fuller, and I was carrying those people forward, but also the kinds of technologies that I thought fitted in with the “everything goes,” “let’s try stuff” approach that the hippies brought to the world.  I think we need that again now, that there's a younger generation who does not bear relation to the Cold War, which is what my generation did, is not liberated by drugs, which my generation was, is liberated maybe by communication technology and the crisis that the current generation is facing is climate change.  In their lifetime their world will change, and they're the ones that are going to be in charge of figuring out what to do about that.  And I think that that is going to be realized to be a somewhat revolutionary process because the older generation is dragging its feet in this matter and I think the younger generation is much more comfortable with technology.  Like bio-technology, we're starting to get "green bio-hackers," they're much more comfortable with communication technology obviously, so the cell phone revolution in the developing world is something that young people feel a part of.  And I think they are going to be much more comfortable with nuclear technology because they don’t have the Cold War legacy of fears about atomic weaponry.

An Officer and a Bohemian