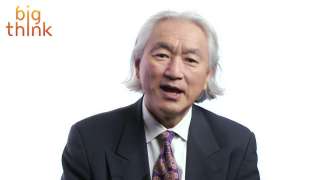 A Black Hole in Our Own Backyard

A wandering black hole may catch up with us one day and eat us for breakfast and it wouldn’t even burp in the process.

Michio Kaku: We now have bagged some of the biggest black holes ever recorded in the history of science that have gobbled up over 20 billion stars.  What a feast of astronomical activity.  These gigantic black holes lurk at the center of galaxies.  We have one right in the center of the Milky Way Galaxy, and in fact, if you want to see a black hole tonight, go outside, look in the direction of Sagittarius--that’s where we have the center of the galaxy and a black hole weighing perhaps two to four million times the mass of the sun lurking right at the center of our own backyard.

Now, to be real, you’re not going to see much tonight if you look in the direction of Sagittarius because of clouds and also galactic dust clouds.  The galaxy is quite dusty.  That’s what we’re made out of in fact.  We’re made out of galactic dust.  And if you look at the center of the Milky Way Galaxy by rights you should see a fireball, a fireball that outshines the moon.  Every night there should be this gigantic fireball coming out representing the center of our galaxy, but dust clouds obscure it, so you don’t really see much of anything at all.  But lurking in that direction is the black hole at the center of our galaxy.

Our black hole is actually rather small and rather tame, but these black holes discovered just a few weeks ago are so massive that we believe that they are actually remnants of quasars.  Quasars are baby galaxies that were born near the beginning of the universe itself that are raging black holes in space.  They are so bright you can easily pick them out in photographs on the planet earth and they date all the way back to almost the Big Bang itself.

But what happened to the quasars?  We don’t see quasars in our galactic vicinity anymore.  So they must have become quiet.  So some people believe that these giant black holes that we just discovered are in fact baby quasars that simply got old and matured, and now we see them as gigantic black holes lurking in space.

Well, some people say let’s go in the opposite direction and find mini black holes.  Are they dangerous?  Well, realize that we orbit, we orbit around the black hole at the center of the Milky Way Galaxy.  That’s why we’re here today to talk about this on the Internet.  We’re not swallowed up by a black hole because we orbit around them.  However, are there wandering black holes?  And the answer is yes.  In fact, we’ve been able to track wandering black holes as they wander through the galaxy.  One day, one of them may catch up with us and eat us for breakfast and it wouldn’t even burp in the process.

Now, a black hole is black.  It’s invisible, so how the hell do we know that there is a wandering black hole in our vicinity?  The answer is quite easy.  It was found by accident by taking a picture of the night sky, and taking the same picture at a different time, you see a distortion, a distortion of light and then like time lapse if you put these photographs together you see that the distortion goes in a straight line.  And then you say “Aha, that’s the black hole.”  Even though it’s invisible it distorts light.  For example, many people wear glasses.  There is glass inside your glasses, but how do you know that?  How do you know that there is glass inside your glasses when glass is invisible?  Well it’s obvious.  Glass distorts light.  That’s how you know that something that is invisible is actually there, and the same thing with black holes.  They’re invisible, but they distort star light as they move.  And these are mini black holes.  They weigh a few times more than our sun but they’re massive enough to disrupt the entire solar system if one day one creeps up behind us.

So one day if a wandering black hole snuck up behind us, how would we know?  First of all, Pluto and Neptune would begin to perturb.  Some of them would be, in fact, flung into outer space.  As the black hole got closer and closer to Planet Earth we would see more and more disruptions in the solar system as more planets got flung into outer space.  And, in fact, as it whizzed by the earth it could even gobble up the earth, in fact, eat up the sun and hardly even notice.  And so the appetite of a black hole would be enormous, and it’s something that at some point in the future we may encounter, that is, a wandering black hole in our own backyard.

Adultolescence: It’s the Beginning of a New Age