3 simple ways to help someone suffering from illness

How to actually help a person who's ill? Don't be afraid to be funny, says Jeannie Gaffigan.

Jeannie Gaffigan
Jeannie Gaffigan is a director, producer and comedy writer. She co-wrote seven comedy specials with her husband Jim Gaffigan, the last four of which received Grammy nominations. With the help of her two eldest children and some other crazy moms, created The Imagine Society, Inc., a not-for-profit organization that connects youth-led service groups.
09 February, 2020

JEANNIE GAFFIGAN: I think that when someone is critically ill, they need a few very simple things. They need compassion. They need humor and they need touch. Because people do not touch you when you're sick. I mean nurses and people stick needles in you and feel your pulse and touch you that way but I couldn't eat or drink. I was on tubes and I couldn't swallow at all and that was pretty brutal. But at a certain point I realized that there's something about—and I have a ton of kids so I'm touched like all the time—and then I went from being touched, like "Stop touching me, kids!" to like, "Could someone touch me, please?" I think that human contact, like touching and looking into that sick person's eyes and not avoiding looking at them and looking into their eyes and just being like, "It sucks. Sick of it. You are sick of it." When my sister said "you're sick of it" she would be in my mind and go you're sick of it. I'm like, I am sick of it. Like it meant so much to me that she knew I was sick of it.

And the thing that I write about in the book that is so important is humor because—first of all I love Jim [Gaffigan] to death and he was so, so important to me recovering at home when things got really, really hard. But when I couldn't move and he was all busy in something and not really making jokes or being him, when somebody would come in the room and say something funny I felt my blood start to move. I felt like I was getting better.

I tell a story in the book about my friend Karen. She came in and she is a comedian and she came all the way up to Mount Sinai to visit me. God knows why. She probably had like a gig in the neighborhood. And she came in and she was like she walked in—a lot of people would look at me and start crying. They would be like "Oh my god, I'm so sorry" or whatever and I'm like uhh. She walked in and she goes "What, you're not even bald? I came all the way up here and you have all your hair. Your hair looks great." And then she'd say things like, "Actually, you look pretty good in that gown... but I guess you can wear anything when you're model skinny." Like she was just funny and I was so happy because people are trained to enter a sickbed room like it's a funeral and creep in and be like "Hi, how are you doing?" I mean, I got that all the time. But this different thing about coming in—I'm not saying dress up like a clown. You've got to be appropriate, but people think it's inappropriate to be funny around critically ill people. But people want to be talked to, be listened to even if they can't talk. My sister was listening to me. She looked into my eyes and she was like "Oh, you are sick of it." I was like—it gave me so much joy. So those kind of things like touching, compassionate looking, and being funny. And also in my book I have a whole list of dos and don'ts. I suggested everyone who reads my book look up the dos and don'ts because those were written in the hospital, in reaction to both dos and don'ts. 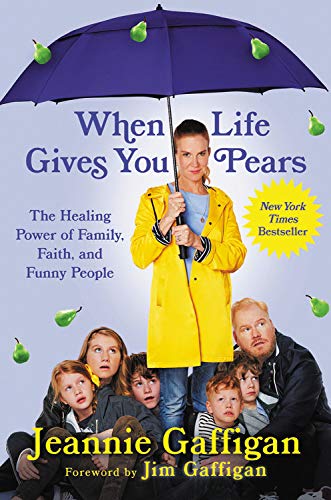