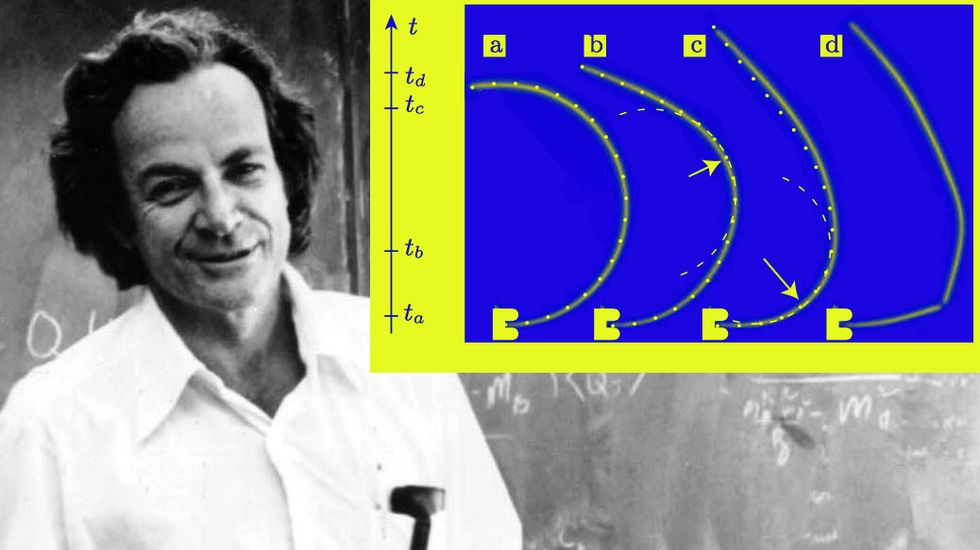 Richard Feynman, world-class physicist, bongo player, and writer of letters, once spent an evening trying to break spaghetti into two pieces by bending it at both ends. After hours spent in the kitchen and a great deal of pasta having been wasted, he and his friend Danny Hillis admitted defeat. Even worse, they had no solution for why the spaghetti always broke into at least three pieces.

But science loves a good challenge

The mystery remained unsolved until 2005, when French scientists Basile Audoly and Sebastien Neukirch won an Ig Nobel Prize, an award given to scientists for real work which is of a less serious nature than the discoveries that win Nobel prizes, for finally determining why this happens. Their paper describing the effect is wonderfully funny to read, as it takes such a banal issue so seriously.

They demonstrated that when a rod is bent past a certain point, such as when spaghetti is snapped in half by bending it at the ends, a "snapback effect" is created. This causes energy to reverberate from the initial break to other parts of the rod, often leading to a second break elsewhere.

While this settled the issue of why spaghetti noodles break into three or more pieces, it didn't establish if they always had to break this way. The question of if the snapback could be regulated remained unsettled.

Physicists, being themselves, immediately wanted to try and break pasta into two pieces using this info

Ronald Heisser and Vishal Patil, two graduate students currently at Cornell and MIT respectively, read about Feynman's night of noodle snapping in class and were inspired to try and find what could be done to make sure the pasta always broke in two.

By placing the noodles in a special machine built for the task and recording the bending with a high-powered camera, the young scientists were able to observe in extreme detail exactly what each change in their snapping method did to the pasta. After breaking more than 500 noodles, they found the solution.

The apparatus the MIT researchers built specifically for the task of snapping hundreds of spaghetti sticks.

(Courtesy of the researchers)

The spaghetti will break into two pieces if the snapback is properly dispersed through the noodle by twisting it while it is bent. The twist must be rather severe though, nearly 360°. The two ends of the noodle must then be bought together very slowly.

The twisting adds another wave of energy to the snapback, one which tends to make the noodle straighten out again. When both waves are going through the noodle at the same time, the most intense pressure on the noddle is reduced and the second fracture is prevented.

The results hold true for spaghetti noodles of different diameters, though the scientists note that other pasta noodles might act differently. Having solved the problem of how to properly break spaghetti, they plan to focus on linguine next.

What possible application could this have?

The snapback effect is not limited to uncooked pasta noodles and can be applied to rods of all sorts. The discovery of how to cleanly break them in two could be applied to future engineering projects.

Likewise, knowing how things fragment and fail is always handy to know when you're trying to build things. Carbon Nanotubes, super strong cylinders often hailed as the building material of the future, are also rods which can be better understood thanks to this odd experiment.

Sometimes big discoveries can be inspired by silly questions. If it hadn't been for Richard Feynman bending noodles seventy years ago, we wouldn't know what we know now about how energy is dispersed through rods and how to control their fracturing. While not all silly questions will lead to such a significant discovery, they can all help us learn.