Star Wars is one of the most successful film franchises in history. With millions of fans, and several spin off films coming into production, the series seems destined to continue for years to come. An excellent example of the Hero’s Journey, the films are great fun, and are a decent way to spend a few hours. But, in watching the movies, have you ever considered what the moral might be? Is there a message?

Science fiction author David Brin – author of The Postman, Startide Rising, and an astronomer who works with NASA – thinks he knows what the moral is, and it might not be one that you like.

He suggests that Star Wars “belongs to our dark past. A long, tyrannical epoch of fear, illogic, despotism and demagoguery that our ancestors struggled desperately to overcome, and that we are at last starting to emerge from, aided by the scientific and egalitarian spirit that [George] Lucas openly despises.”

Oh, and he notes who he thinks the most evil character is… Yoda. As he put it:

“I do hope folks will notice, for example, that Yoda, in Attack of the Clones, orders the Jedi into a suicide charge that kills most of them, then conveniently shows up with the new clone army that he ordered. An act of treachery and betrayal so stunning that I had to watch the movie twice.”

“I have defied folks to name one time when he says or does anything that is indisputably wise. The trail of destruction that follows him and every decision that he makes is inarguable and overwhelming.” 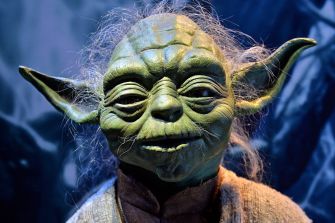 The face of a tyrant.

If we look at it from Brin’s perspective, the story reads like this:

In a galaxy where people are biologically disposed to being able to use magic, a group of those chosen few are asked to protect democracy and liberty. Not only do they fowl it up horribly, but their leader orders most of them into suicide missions and the one person who comes close to doing his job only manages it by means of a coup attempt, which is foiled by a poorly trained member of his own cult.

After that the dysfunctional republic, which never does anything, collapses. The empire, which seems much more on top of things, takes over. Billions are killed, but the story shows us that the main villain is redeemed merely by saving another chosen individual. No mention is made of the possibility of Darth Vader still being rather evil, or having more to do to redeem himself at this point.

In the most recent film, the new Republic is never shown doing anything but being destroyed – it is the First Order and a dictatorship that manages to build an impossibly large space station, using the energy of an entire star. An impressive level of technical achievement.

Oh, and all the people responsiblefor half of this are related, because you need to be biologically disposed to use the force. These Mutant Demigods are the cause of, solution to, and focus of all the problems that kill billions of people. People who are not mentioned again after the plot point passes.

He does note, however, that the first film had egalitarian, democratic messages. In that film, the ways of the force can be learned, Obi Wan even offers to train Han Solo in the force; but these messages are largely gone by the sixth film, as is the ability to learn the use of the force.

Maybe Dr. Brin is just looking too far into it. After all, it’s just a story!

Yes it is, but stories are important. Mythology allows us to make sense of the world, it is how we send messages across generations. Shared myths can give us a sense of community, in the science fiction genre especially.And of course, the argument that something is “just a story” belittles it. If we are to take something seriously as a work of art, a great movie, or a strong narrative, we must analyze it. Saying that it is “just a story” as a way to get out of that analysis makes the film less substantial.

And, Lucas has admitted to supporting government by “A good despot”, so maybe the idea that the films belittle democracy, as people think in China, is not too far of a stretch.

Dr. Brin does offer a lesson to potential writers on how not to fall into the pitfalls that Star Wars did. To him, most of it comes down to lazy writing.

“Why do almost no films ever show civilization functioning, institutions doing their jobs, democracy working? The answer is simple: laziness. A storyteller’s job is to keep his or her characters in pulse-pounding jeopardy for 90 minutes of film, or 600 pages of a novel. It’s hard to do that if they can dial 911 and get skilled professionals to come to their aid. So you see a panoply of tricks used by directors and authors to deny their characters useful aid. That’s fine, but when the trick is to simply spread the assumption that there are no decent civil servants, there are no smart cops, there are no loyal first responders out there, then that spreads a propaganda message that such things are impossible in our real world. It takes real writing to come up with a way of keeping your characters in jeopardy, despite there being skilled professionals who want to help them…

How much better would it be if they showed the Republic sending its fleet to help and it was kept at bay by the First Order’s fleet? Then you have a chance for three minutes of rollicking space battle that gives the Rebellion just enough of a gap to get through and attack the super mega granddaddy Death Star. It would be more exhilarating, and it would also say you know the Republic isn’t useless. It’s not going to save the day—that’s going to be our heroes—but it could help them, and then you would come away with a notion that civilization isn’t futile. It can help the heroes even if just a little bit.”

So there you have it. Does Star Wars offer us a tyrannical, elitist message? Perhaps, but then again, some elements of the story were clearly not planned in advance: as pointed out in The Secret History of Star Wars. Luke wasn’t related to Darth Vader until the last draft of the script for the second film. Perhaps this message is an error?

Then again, even if this message was planned, maybe that’s alright. After all, in the West the idea of having several points of view in the public discourse is held as ideal. Maybe Star Wars is the voice arguing for dictatorships?Or maybe, it is just a kids movie.

Tags
anti-democraticDavid BrindictatorshipevilGeorge Lucasreviewscreenplaystar warstyrannyyoda
In this article
anti-democraticDavid BrindictatorshipevilGeorge Lucasreviewscreenplaystar warstyrannyyoda
Related
Thinking
The power of authority: how easily we do what we’re told
Milgram’s experiment is rightly famous, but does it show what we think it does?
Neuropsych
What did Hannah Arendt really mean by the banality of evil?
The banality-of-evil thesis was a flashpoint for controversy.
Neuropsych
Why are some psychopaths ‘successful’? It may depend on one personality trait
What makes some psychopaths better able to control their antisocial tendencies?
Thinking
What are the chances that God is actually good?
Philosophy professor James Sterba revives a very old argument.
High Culture
9 of the best Star Wars gifts not named Baby Yoda
Baby Yoda merch is on the way, but these Star Wars gifts are available right now.
Up Next
Culture & Religion
Anne Rice – In the Blood – Think Again Podcast #77
Spontaneous talk on surprise topics. “Vampire Chronicles” author Anne Rice on superstition, science, and why she thinks Freddie Mercury was a vampire.