Wiring the Brain: How Viruses Can Be Engineered to Trace Neural Connections

The fact that the rabies virus can spread from an infected neuron to other neurons connected to it makes it an almost perfect vector for tracing connections in the brain. 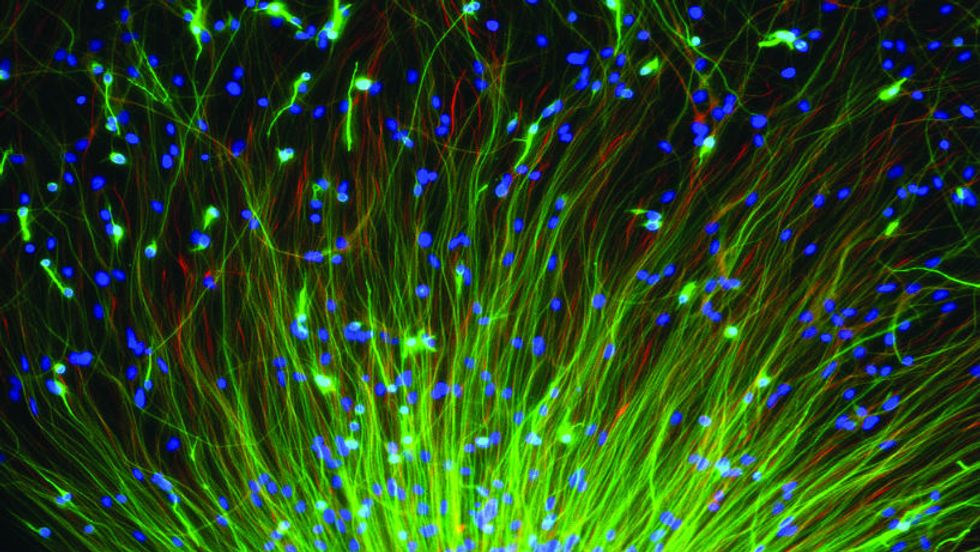 Dr. Kevin Mitchell is a geneticist who studies neural development. In this guest post, he explains how viruses can be used to map connections in the brain.

It is hard to overstate the complexity of the brain. Not only are there tens of billions of individual nerve cells, or neurons, which make literally trillions ofconnections between each other. The complexity really lies in the fact that there are hundreds or maybe even thousands of different types of neurons, which are arranged in highly-organised patterns, and which connect to each other in very specific ways. Now, a new technique is emerging that enables neuroscientists to trace these kinds of connections by enlisting help from an unlikely source – viruses.

To understand why this approach is so exciting, we need to consider the scope of the problem it can help solve. This begins with individual neurons themselves. Neurons are polarised – they have an end for inputs and an end for outputs. Each of these may be branched to give thousands of independent sites of input and output. For any given neuron, there are other neurons that connect to it (information flows from all those neurons into our subject neuron) and other neurons that it connects to (information flows from our subject neuron out to all these neurons).

But neurons are not all the same. The most obvious and perhaps most important difference between neurons is that some are excitatory and some inhibitory. When an excitatory neuron is activated, it releases neurotransmitter at the connections it makes with its output neurons – this neurotransmitter tends to make those other cells electrically active. The exact opposite happens when an inhibitory cell is activated – it releases a different neurotransmitter onto its target neurons, which makes them less electrically active.

At any given moment, each single neuron is integrating the incoming information from typically hundreds of excitatory and inhibitory neurons – the balance between these and their precise timing will determine whether it becomes active enough to “fire” a signal to its own output neurons. (Without the inhibitory neurons, any electrical activity would rapidly spread through the entire brain in an epileptic-like firestorm).

There are hundreds of subtypes of excitatory and inhibitory neurons, all with different jobs to do. The way in which these different cell types are interconnected determines the functional properties of each little microcircuit in the brain – the type of information that comes into the system, how it filters and transforms that information, how long a neuron will be active before it's shut off, whether it will fire with a rhythm and at what frequency, etc.

These parameters determine the computations that the circuit can perform. While some of the details of such microcircuits have been worked out, for the most part we remain unblissfully ignorant of this crucial information. But we cannot hope to understand how the brain functions without knowing how the basic units of computation are put together.

How to solve this problem? In looking for ways to map the connections of neurons, scientists are turning to viruses – in particular, those that have evolved to infect neurons and to spread from one to another through the synaptic connections between them. One of these is the deadly rabies virus – a specialist in infecting neurons.

Neural connections in the brain

Rabies is typically transmitted from one infected animal to another through saliva, often via a bite, which releases viral particles that infect peripheral neurons. From there, it spreads backwards into the spinal cord and brain, passing from the initially infected neurons into every neuron that connects to them. This continues in the next neurons, resulting in the rapid spread of infection throughout the enture nervous system. This has a striking effect onthe host – among other symptoms, increasing aggression and attack behaviors, along with salivation, resulting in spread to a new host.

The fact that the virus can spread from an infected neuron to other neuronsconnected to it makes it an almost perfect vector for tracing these connections in the brains of experimental animals. To make it perfect required some modifications.

First, using the tools of molecular biology, researchers have modified the genomeof the rabies virus, so that, as well as its own genes, the virus now carries so-called marker proteins, like the well-known green fluorescent protein from jellyfish. When ultraviolet light is shone on this protein, it fluoresces, giving off avivid green light. Neurons infected with the virus (either directly or via synaptic connections) can thus be beautifully visualised.

The sequence of the rabies virus genome - which is made from RNA, not DNA - encodes five proteins that are essential for the virus to replicate and be transmitted from one cell to another. When a rabies virus infects a neuron, it starts to express these proteins and replicate its genome. These replicates are packaged into a viral particle, which includes an envelope of host cell membrane studded with viral proteins.

One of these is the rabies glycoprotein, encoded by the G gene. This protein is essential for the viral particle to infect another neuron – it accomplishes this by binding to receptor proteins on the surface ofthese neurons, which leads to it being sucked into the cell (tricksy!).

A Solution: Delete the Genes

Even more tricksy is how scientists have taken advantage of this system to control which cells can be infected and to limit the spread of virus to only one synapse. This involves modifying both the virus and the cells of the host animal (usually a transgenic mouse). First, the G gene can be deleted from the viral genome – these viral particles can infect neurons when the virus is grown ina dish with the G protein added. But after they infect one neuron they cannotspread to others because they can’t make more G protein. The trick is to makethe infected host cell supply that protein – this can be achieved by adding DNA encoding this protein directly into a single cell.

When that single cell is infected, it leads to replication of the virus and transfer to only those cells with directinputs on the primary neuron. Scientists can thus visualise all the inputs ontoa single neuron, and painstakingly reconstruct the connectivity of an entiremicrocircuit.

Since the development of these techniques there have been a whole range of further modifications, allowing infection of specific cell types, the tracing of connections in the other direction (to all the output neurons) using different viruses, and the transfer of other cargo proteins to allow all kinds of additional analyses of the functions of these microcircuits.

In combination with tremendous advances in microscopy, these approaches are leading to a resurgence of “descriptive” neuroanatomy – just the kinds of studies that fueled the insights of pioneering neuroscientists like Ramon y Cajal 100 years ago.

Those insights derived from the application of new technologies forvisualising single neurons. These new techniques take us the next step to see themicrocircuits that make up the computational units of the brain.