The Truth Behind Area 51

Area 51 has long been a treasure trove for conspiracy theorists. Now a new book delivers some bombshell claims about the world's most famous and secretive military installation. 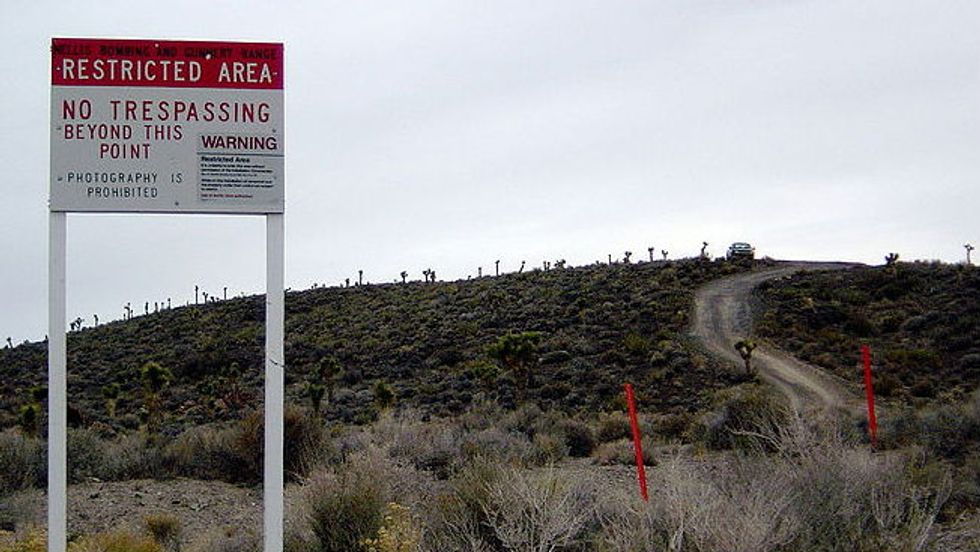 Area 51 is a military installation located in Nevada that is so veiled in secrecy that its actual existence has never been officially acknowledged. Not surprisingly, this mysterious base has long been a treasure trove for conspiracy theorists. Claims have been made that the facility stores aliens and is the site where the lunar landing hoax was filmed.

A new book argues Area 51 was, in fact, set up by the U.S. government to keep the country safe and prevent nuclear war. The facility's purpose was not to hide aliens from the public, but to function as a "test facility working to move science and technology faster and further than any other nation." The Los Angeles Times national security reporter Annie Jacobsen's Area 51: An Uncensored History of America's Top Secret Military Base is the first book on Area 51 that is based on eyewitness accounts and recently declassified documents. Jacobsen presents a thorough and level-headed history that includes revelations about controversial black operations and secret weapons development programs at the facility. And yet, in the process of debunking a long list of conspiracy theories, Jacobsen drops a bombshell of her own.

All of the conspiracy theories involving Area 51 go back to one seminal event: a flying saucer evidently crashed in Roswell, New Mexico in 1947. Jacobsen argues the saucer was not piloted by extraterrestrials, as some would have us believe, but rather, by 13-year old Russian children whose bodies had been surgically re-engineered by Nazi scientists to make them look like aliens. These human guinea pigs were sent to America on Josef Stalin's orders as an act of "black propaganda." Apparently Stalin--who wasn't able to compete with the U.S. in nuclear weaponry--was hoping to instead cause mass panic, much in the same way the American public reacted to Orson Welles's 1938 radio broadcast "War of the Worlds."

You got all that?

This story obviously raises many more questions than it answers, including questions about Jacobsen's sources. While her book features interviews with dozens of eyewitnesses, Jacobsen's most scintillating claim relies on a single anonymous source.

So why have other witnesses not come forward? Jacobsen poses this question herself. For instance, why didn't the Truman administration expose Stalin's inhuman cruelty to the world, an act that certainly would have served the U.S. Cold War propaganda effort quite well? The answer, as Jacobsen's source revealed in yet another bombshell, is that the U.S. was doing the same thing--conducting human experiments with deadly results all the way up until the 1980s.

The exact nature of the experiments that may have gone on at Area 51 remains a tantalizing mystery. And yet, these claims, if true, would certainly undermine the moral authority of the U.S. government and invite comparisons to Josef Mengele (the Nazi doctor who, Jacobsen claims, made a deal with Stalin and committed the ghastly horrors to the children found in the Roswell crash).

There is also a separate issue at stake in Jacobsen's argument. While it is a common practice for journalists to use unnamed sources in stories, it is a thorny issue no less. One need only be reminded of Judith Miller's live-by-your-sources die-by-your-sources misadventure with Ahmad Chalabi that was so central to The New York Times coverage of the Bush administration's claims that Iraq possessed weapons of mass destruction. On the other hand, Nixon likely would have filled out his second term and Woodward and Burnstein would still be working the Metro desk if it weren't for Deep Throat.

It should not be all that surprising, especially given the intense secrecy surrounding Area 51, that the most dramatic and damning revelation in Jacobsen's book was conveyed by an unnamed source. What matters is how this type of revelation is verified and presented. Jacobsen takes some pains to explain the circumstances of how she learned the information, and even shifts the point of view of her narrative to the first person in order to walk us through the process she took as a journalist in reporting the story. You will have to read her book to decide for yourself.

In her recent interview with Big Think, Jacobsen talked about the veracity of her source's account, the battle for truth in the digital age, and the lessons that can be drawn from her story about government secrecy and the need for transparency.

Big Think: In today's digital society, where completely unsubstantiated rumors often gain enormous traction on the Internet (e.g. Obama is a Muslim), what does it mean to set the record straight? How can we make sure that factual information wins the day?

Annie Jacobsen: When writing a non-fiction book, an author annotates their work in an end section called "Notes." There, readers can learn where information is sourced from. To report my book, in addition to reading thousands of pages of declassified documents, I interviewed 74 men with rare, direct access to Area 51. Thirty-two of these men lived and worked at Area 51 for extended periods of time. For all but one source, I use the mens' real names. Reporters often use unnamed sources who speak on the condition of anonymity because those individuals are not authorized to speak in an official capacity.

BT: The bombshell at the end of your book is that a flying disc really did crash in New Mexico and its crew were surgically re-engineered children that Stalin had sent to the U.S. in the hope they would be mistaken as visitors from Mars. It was an act of so-called "black propaganda," and the reason why Area 51 was made secret. This is obviously very difficult for many people to believe. How were you able to determine that your source is credible on this account? How can you convince the public that such a story is true based on a single anonymous source?

AJ: The source is credible. I stand by the veracity of his account. I interviewed him for what has now been over two years and found his recollections of former, top secret projects -- ones that could be fact-checked -- to be precise. I also examined his military service record and his work for the Atomic Energy Commission contractor, for which he received many awards and citations of excellence. He was a member of the Manhattan Project immediately after the war. He was involved in nuclear weapons testing across three decades and worked with America's most famous nuclear scientists and engineers. He had nothing to gain by telling me what he witnessed, other than his desire to clear his conscience and set the record straight.

BT: What lessons can be drawn from the example of Area 51 about government secrecy today? In other words, you explain how government secrecy often creates suspicion. What does this say about the need for transparency in a democratic society?

AJ: The Atomic Energy Commission  (now called the Department of Energy) and the CIA have been two of the biggest players at Area 51 and they keep secrets under different systems of control. The CIA is governed by presidential executive orders and its secrets are called national security information. The Atomic Energy Commission has a system of secret keeping that runs totally separate from the president’s system. In other words, the nuclear agency maintains a parallel body of secrets classified based on factors other than presidential executive orders. It is from the Atomic Energy Act of 1946 that the concept “born classified” came to be. Even more problematic is the Atomic Energy Commission’s “Restricted Data” classification, which allows secrets to originate outside the government through the “thinking and research of private parties.” Academics argue that this system gives the AEC "unanswerable authority” and I agree.

BT: How does this story inform our current debate about information in the age of Wikileaks? (Or what lessons does it teach us that might inform a decision such as whether or not to release a photo of Osama bin Laden's body?)

AJ: Most contemporary programs involving national security are classified when they are happening for good reason. It's why reporters don't publish U.S. troop movements. But as we know from history, some programs are kept classified decades after they happen because they were shameful and because they ran counter to democratic ideals. In my book, I write of several such programs. As a reporter, I believe transparency is important particularly when it shines light on wrongs from the past. Transparency is a hallmark of democracy and there is much to learn from past mistakes.

UPDATE 6/7/11, 12:17PM EST: After negotiating with Jacobsen and her source, an ABC News crew met with the unnamed source and claim to have found discrepancies in the story, which they confronted Jacobsen with in this video here. Another of Jacoben's sources that ABC spoke to, TD Barnes, pushed back against her story as well, claiming he and others are outraged by the book's claims.