NASA engineer Adam Steltzner is driving his team to attempt the seemingly impossible. 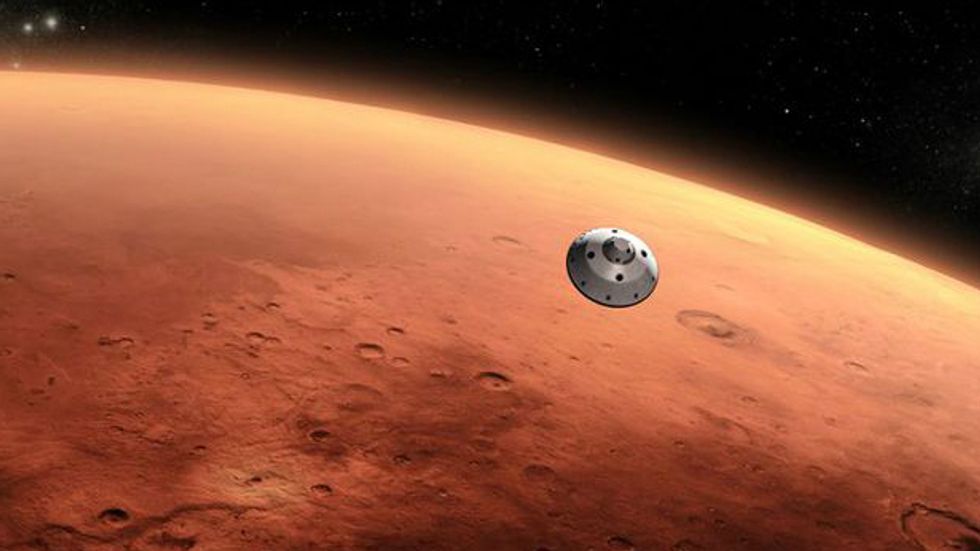 Here's an interesting engineering challenge. Fly an unmanned spacecraft carrying a 2,000 pound rover 300 million miles to Mars. Smash into the planet's extremely thin atmosphere at 13,000 mph, which will light up the craft's heat shield like the sun, reaching temperatures of 1,600 degrees. The atmosphere will slow your craft down to about 1,000 mph, but you will need to figure out a way to eventually slow to zero, jettison the heat shield and simultaneously guide the ship to a safe landing in the constrained space of the Gale crater.

A supersonic parachute will slow you down to 200 mph, but you're still coming in too hot for a landing. It's time to exercise your pyrotechnic devices, blasting rockets to divert the craft away from the parachute. These rockets can't get too close to the ground because they might create a massive dust cloud and damage the rover's equipment. So a sky crane will have to gently lower the rover to the surface (A so-called 'rover on a rope': is it genius or crazy or a lot of both?).

This sequence is dramatized in a thrilling video below, which NASA's Jet Propulsion Lab has dubbed the "seven minutes of terror," as it will take seven minutes for the craft to travel from the top of the atmosphere to the surface of the planet. It will take 14 minutes to transmit the signal back to Earth, meaning you will have to wait in agonizing uncertainty for seven minutes, not knowing whether your $2.5 billion mission is a success or failure.

You give up? No one would blame you.

Adam Steltzner did not give up. In fact, the NASA engineer has spent the last nine years of his life leading a team to solve this problem. Given the margin for error -- which is zero -- it is a good thing that Steltzner is a cool cat, which is how NPR described him in a recent profile. We are rooting for his efforts to come to fruition early Monday, when the Mars rover is scheduled to complete its nine-month journey. On the other hand, if anything goes wrong in the sequence described above, Steltzner's mission will fail. Like those odds?

The highly complex field of spacecraft engineering, not surprisingly, is clouded with the kind of jargon The Associated Press describes as "a sort of Martian alphabet soup."

Steltzner's team is responsible for EDL, or Entry, Decent and Landing, the crucial phase of the Curiosity mission outlined in the video above. Steltzner's team had to custom design a landing system for a rover that is five times heavier than previous ones sent to Mars. They also had to contend with the challenge of the Red Planet's extremely thin atmosphere. A new parachute and rocket system had to be custom designed as well. And yet, the team's signature innovation is the way it all works together.

Therefore, if successful, this mission will be the triumph of both teamwork and leadership. The teamwork involved nearly a decade of tinkering the system's design. The leadership has come from the steady hand of Steltzner, who traded a career in rock n' roll for physics. His former career as a bassist appears to be suiting him well at NASA. In the face of adversity, Steltzner advises his team to keep themselves "like, chill, and focused and not freaking."

Two out of every three missions to Mars end in failure. Hero or goat, we commend Steltzner for driving his team to attempt the seemingly impossible, and will be inviting him to appear on Big Think.

As X Prize Founder and space pioneer Peter Diamandis tells us below, every radical breakthrough began as "a crazy idea." The commercial space industry is a perfect example. People didn't want to invest in the idea because they didn't believe it was possible. From a leadership standpoint, Diamandis tells us, you need to make people believe it is possible.

The significance of the Curiosity rover mission is twofold. If NASA's team is able to successfully complete this engineering challenge, the landing will be a feat unto itself. Furthermore, if Curiosity isn't consumed in a fireball, the machine will go on to conduct a geological survey of the planet for one Martian year (or 687 Earth days). Its first discovery might be imminent. Curiosity is touching down on the Gale Crater because scientists believe the sediment there will contain evidence that there was once a habitable environment on Mars.

You can give yourself a front row seat in a video game that resulted from a partnership between NASA and Microsoft called The Mars Rover Landing. The game is available as a free download at Xbox Live. NASA's engineers describe the gaming experience as very similar to what the actual landing will be like.