How the Westboro Baptist Church Can Help You Lose Weight

Do you want to learn to play the guitar? Speak Spanish? Lose weight? Then set aside $100 of your pretax income to donate to the Westboro Baptist Church. 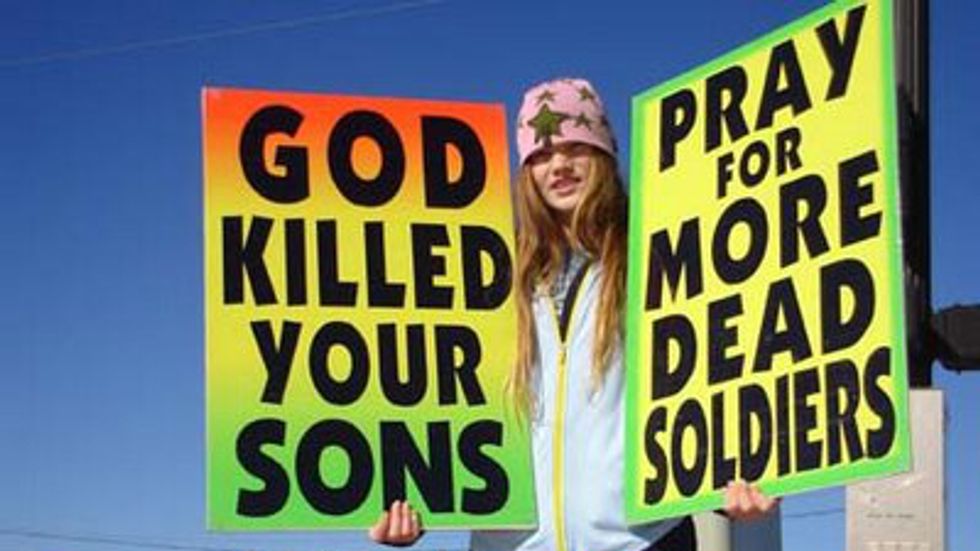 Do you want to learn to play the guitar? Speak Spanish? Lose weight? Then set aside $100 of your pretax income to donate to the Westboro Baptist Church. Come again?

The Westboro Baptist Church, based in Kansas, does a better job than perhaps any other hate group in uniting Americans against it. The 40-member group pickets military funerals, stomps on American flags and targets Jews, gay people and the families of murder victims to get media attention. If you're not offended by this group in some way, you're just not paying close enough attention.

If you want to learn a valuable life skill or improve your health you should consider earmarking a portion of your hard-earned money to donate to a group that really makes your blood boil. It doesn't have to be Westboro. You support gun control? Pick the NRA as your anti-charity. You're pro-life? Planned Parenthood.

As meta-learning guru Tim Ferriss tells Big Think, "you would rather slam your head in a car door than give money to this group." So go ahead and set aside that $100. Then find a really hard-nosed friend, someone to play referee and hold you accountable. Then if you light up that cigarette or eat that chocolate, your friend will make sure you mail your donation to the Tea Party or the ACLU. It's your choice.

"The point here is that people will work much harder not to lose something than they will to gain something," Ferriss says. In other words, when you set a goal for yourself, there needs to be something meaningful at stake. Ferriss, the author of The 4-Hour Workweek and the recent meta-learning book The 4-Hour Chef, told us in a recent interview that this concept should not be regarded as a depressing fact about human nature, but as a highly useful insight. Ferriss says if you create consequences for your actions you can accomplish "miraculous feats."

Ferriss describes a meta-learning blueprint that can be applied to the acquisition of any skill, whether it's hitting a baseball or memorizing a series of facts. This "grand recipe," as Ferriss calls it, involves deconstruction, selection, sequencing and stakes.

Deconstruction involves taking an amorphous and intimidating skill like learning to speak a language and "breaking it down into more manageable pieces that you can look at under a microscope.

Selection involves picking the activity that will basically result in the highest return on your investment. In the case of learning a language, "selecting 2.5 percent of the total vocabulary will make you functionally fluent," Ferriss says. So you will need to set out to master those high frequency words.

Sequencing is what Ferriss calls the "secret sauce" in his recipe. Ferriss doesn't play golf but says he enjoys speaking to the best teachers in the world and that is why he sought out Stan Utley, a short game coach who focuses on putting. Many people come to Utley and ask him to look at their form. Utley will respond, "Your form is fine. Your sequence is off. The parts of your body that should be moving in one order are moving in another." In all of his books, Ferriss presents methods for distilling what the right sequence is.

Stakes is creating a carrot or a stick so that you do what you actually need to do. The idea of picking an anti-charity is derived from the site Stickk.com, an online commitment store. There are other sites that can serve as tools as well, such as Dietbet.com, but Ferriss says you really don't need any technology at all. He gives one example:

Tracy, a woman I know, mother of two, 40-something -- she lost I think a total of 130 pounds by creating a betting pool with her co-workers.  A hundred dollars a piece, whoever can lose the most weight in the next -- I think it was six months or a year -- gets the pot.

Now what I want to point out there, though, it’s not just the reward, it’s the fact that they each had one hundred dollars to lose that’s really important. People will work much harder not to lose something than they will to gain something.