A Greenhouse for the Moon, or Mars

With a NASA grant, researchers at the University of Arizona’s Controlled Environment Agriculture facility in Tucson have developed a piece of technology called the “lunar greenhouse,” which will enable a future batch of colonists to sustain themselves on the moon or Mars. 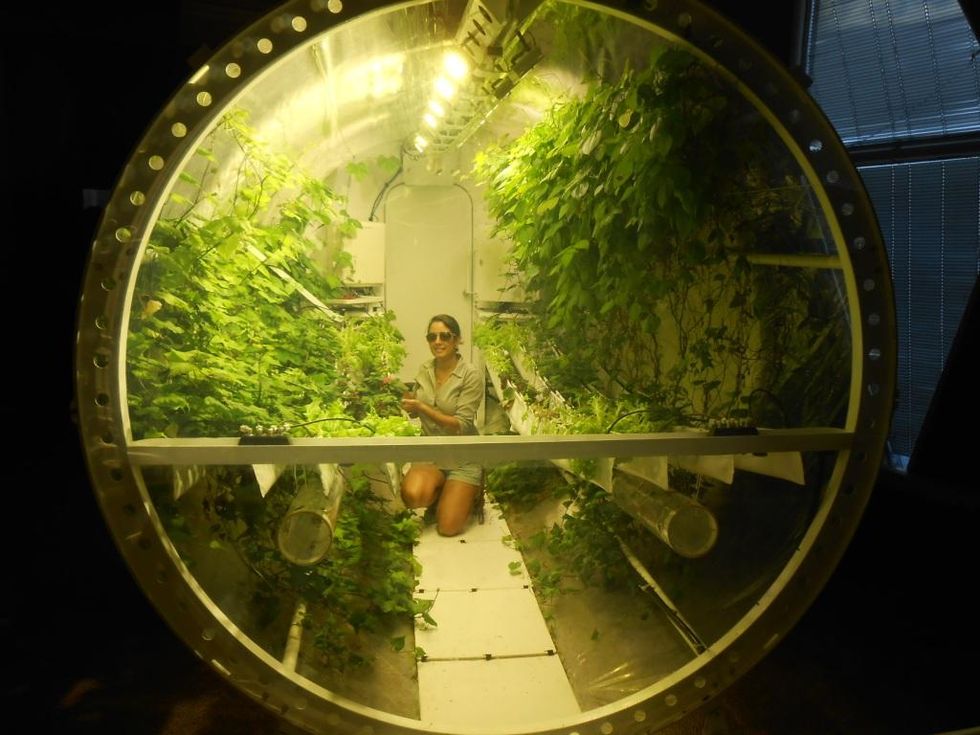 The longest humans have stayed on another world is 21.5 hours. That distinction is held by the Apollo 11 crew — Neil Armstrong and Buzz Aldrin — who touched down on the moon at 4:18 p.m., E.D.T., on July 20, 1969. Four days later, they returned home. But if a vanguard population is to pull up stakes and migrate anywhere off-Earth, there has to be a way for them to be able to survive in a place where there’s no air, water, or vegetation.

"There’s no way we can leave Earth without the plants.”

“There’s no way we can leave Earth without the plants,” said Mike Dixon, professor at the School of Environmental Sciences at the University of Guelph, in Ontario. Or without taking along the infrastructure that will enable us to grow them on an alien world. After all, we can’t carry with us enough boxed meals that we can eat forever. Besides, shipments won’t be easy, immediate, or economical.

With a NASA grant, researchers at the University of Arizona’s Controlled Environment Agriculture facility in Tucson have developed a piece of technology called the “lunar greenhouse,” which will enable a future batch of colonists to sustain themselves on the moon or Mars.

A cylindrical structure, 18 feet long and seven feet in diameter, it harnesses plants to provide the three pillars of life-support in a hermetically sealed environment: clean air, potable water, and nourishment, said Gene Giacomelli, director of the Controlled Environment Agriculture Center and professor at the School of Agriculture and Life Sciences at the University of Arizona.

“It replicates, on a small-scale, the biological collaboration that takes place on Earth.”

It replicates, on a small scale, the biological collaboration that takes place in Earth’s biosphere. In a barter of gases with our botanical partners, we’ll breathe in the oxygen they’ll breathe out. Conversely, they’ll inhale the carbon dioxide we exhale.

Water, stored in a built-in tank below the floor is pumped through a network of thin pipes to eight rows of plant roots, growing in a soilless solution in “envelopes,” on either side of the aisle. They drink some of it for their growth and release the rest as water vapor. That moisture is then captured, cooled, and converted back into distilled water, which can be either cycled back to them or used for drinking or showering.

Its corridor-like interior is created by connecting seven aluminum rings and clothed by a sturdy, multi-layered shell to seal it against the harshness of space. (At the lab, it’s sealed by heavy-duty plastic film.) “Sunlight” is produced by six 1,000-watt sodium-vapor lamps, mounted on the ceiling.

Each weighs about 550 pounds and because it’s collapsible, it can be sent up on a rocket. Once at its destination, it can be extended. On the moon, it’d have to be buried three feet under the lunar regolith to protect it from cosmic radiation and from being ripped open by meteorites. As Mars has a thin atmosphere, it’d placed on its red, dusty soil.

Each “lunar greenhouse” can supply all the oxygen and half the dietary ration of one crew for one day.

The productivity of each device depends on how much light it receives. Studies done by NASA indicate that if a patch of 20 square meters gets the equivalent of half or one-third the brightness of sunlight for roughly 16 hours a day, it’d be able to generate all the oxygen needed by one person and soak up all the carbon dioxide let out.

To furnish 2,500 kilocalories a day, however, the area under cultivation would have to go up to 50 square meters. Reason: All parts of the plant are engaged in making oxygen. But only its edible portion contributes to our nutrition. “So, if you meet the requirement for food, by default, you also meet the oxygen requirements,” said Ray Wheeler, a plant physiologist at NASA’s Kennedy Space Center.

Each “lunar greenhouse” can supply all the oxygen and half the dietary ration of one crew for one day.

Despite its compactness, its mechanism allows for the cultivation of vegetables that grow tall (beans, cucumbers, sweet potatoes, tomatoes) as well those that stay short (basil, lettuce, strawberries.)

“I hope to see a farm on another planet within the next 30 years,” said Giacomelli.