Brian Greene is an American theoretical physicist and string theorist. He has been a professor at Columbia University since 1996 and chairman of the World Science Festival since co-founding it in 2008. Greene has worked on mirror symmetry, relating two different Calabi–Yau[…]
Go to Profile
In Partnership With
John Templeton Foundation 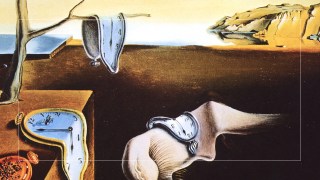 BRIAN GREENE: We know that time, in some sense is at rock bottom that which allows change to take place. When we say that time has elapsed we notice that because things now are different from how they were a little while ago. That's what we mean by time elapsing. But is time some fundamental quality of reality, or is it something that our brains impose on our perceptions to organize our experience into some coherent framework that allows us to survive? I mean, I can well imagine that we have been under evolutionary pressure over the millennia to organize perception so that we can survive, get the next meal, plan for the future. All of that would seemingly require that we have a conception of time that we apply to what we experience out there. But that doesn't mean time as we experience it is real. It doesn't mean that time as we experience is how the world is actually structured.

I mean, there are many ideas that people put forward. The possibility, for instance, that... We all know that matter is made of molecules and atoms. Could it be the time is also made of some kind of ingredient, a molecule of time, an atom of time. Is that really what time is at a fundamental level? And what if you had one of these ingredients in time, a constituent of time, all by itself, would there be any hint of time as we experience it? Or do you need many of these ingredients in order to fill out time as we know it.

I mean, if I handed you a molecule of H2O you wouldn't know that it's wet, that it can quench your thirst. I mean, the ingredient doesn't necessarily bear a direct relationship to the macroscopic, emerging qualities that many of those ingredients when put together will yield like your glass of water. Time could be the same thing.

There might be ingredients of time that bear no resemblance that time as we experience it. And yet that might be the more fundamental way that time is injected into the makeup of reality. Time travel is absolutely possible. And this is not some sort of weird sci-fi thing that I'm talking about here. Albert Einstein taught us more than 100 years ago that time travel is possible if you're focusing upon time travel to the future.

And I'm not referring to the silly thing that we all age. We're all going into the future, sure. I'm talking about if you wanted to leapfrog into the future, if you wanted to see what the earth will be like a million years from now, Albert Einstein told us how to do that. In fact, he told us two ways of how to do it. You can build a spaceship, go out into space, near the speed of light, turn around and come back.

Imagine you go out for six months and you turn around and you come back for six months, you will be one year older, but he taught us that your time is elapsing much slower than time back on earth. So when you step out of your ship, you're one year older, but earth has gone through many, many years. It can have gone through 10,000, 100 or a million years, depending on how close to the speed of light you traveled.

Now of course, what people really want to know about is about getting back. Can you travel back to the past? I don't think so. We don't know for sure. No one has given a definitive proof that you can't travel to the past. In fact, some very reputable scientists have suggested ways that you might travel to the past. But every time we look at the proposals in detail, it seems kind of clear that they're right at the edge of the known laws of physics. And most of us feel that when physics progresses to a point that we understand things even better, these proposals just will be ruled out. They won't work. But I guess I would say there's a long shot possibility based on what we know today, that time travel to the past might be possible, but most of us wouldn't bet our life on it.

Are robots really taking our jobs?