The Unlikely Entrepreneur blog seeks out the human stories behind surprising businesses and the people who run them, many of whom never expected to find themselves running a business. We interview the founder(s) and try to tease out the comedy and the drama in their personal journey from, “Hey, I’ve got a great idea!” to, “Hey, I’ve got 80 million unanswered emails!!!”

Paul Droege wants to get everyone hot for solar. Where Elon Musk‘s SolarCity business focuses on providing solar panels to the burbs, Droege is focusing his efforts on a smaller scale. By handing people the power to choose solar — the apartment dwellers, the people who can’t afford to take on a SolarCity loan, and young people — he believes he can change a market from wanting solar to demanding solar.

The SunPort is his version of a gateway drug to solar panels. Hook them while their young. Only, this is the good kind of hook.

His SunPort plug is an elegant idea that takes advantage of something that already exists, but consumers have failed to ask for. However, in order to demand something, people need to know that it exists. There are tons of unused bits of solar energy, accessible to anyone through the grid in the form of Solar Renewable Energy Certificates or RECs — you just have to ask for it, and that’s exactly what the SunPort does.

The EPA has even made a helpful video about RECs:

The SunPort allows consumers to plug in their laptop, smartphone — any device, really — and vote with their dollar, demanding that your utility company fork over that solar energy to charge your electronics.

“The use of a SunPort is not the same from an impact standpoint as having 30 panels on your roof,” Droege explained. “What is intriguing about it is that using a SunPort just sort of for little, everyday tasks, powering your laptop computer, or something like that, you could still use like 10 times as much solar as the average user on the grid, just by doing that. If you think of that as an amplifier of demand, it’s a pretty big deal. If people start using that, that’s kind of cool just by very modest tasks. If it’s done broadly, it really amplifies demand substantially.”

I sat down to talk to Droege about his Kickstarter campaign to start a solar movement and why the world needs the SunPort.

How has your personal and professional journey led you to develop the SunPort?

I’m a power engineer by training and been involved in the electrical industry all my career, and so, that sort of got me started. Some personal things: I’ve been an owner of solar since the late ’90s, have solar on my house, and also my office building. So, I’ve dealt with the challenges and whatnot of actually putting solar on a building.

My electrical business [was] expanding into the renewable market several years ago and started attending a lot of renewable energy conferences, and at a solar conference had a speaker that said, “How many people here have solar?” and this room is an auditorium with thousands of people, and a few dozen hands went up.

I realize these people that were the insiders, the true believers of solar, that they were having trouble doing it. I realized that if it’s ever going to be mainstream, there’s gotta be something different done — there’s gotta be change in order to make it accessible to anyone and everyone. So, that was what started me on this journey.

Then we just started looking at lots of different ideas, trying to figure out what is actually scalable across all circumstances. Basically, most Americans love solar or at least like solar, but almost no Americans have actually done anything, statistically speaking.

SolarCity has gotten the ball rolling, I see when I walk through my neighborhood all those SolarCity signs, but it still seems to be a bit of a struggle.

Bear in mind, OK, SolarCity is great if you live in the suburbs and you got a good FICO score. But if you live in a high-rise, if you are not in the upper-middle class, it’s not necessarily accessible to you. Leasing is definitely part of the answer, no doubt. It’s part of the solution, but it’s not actually scalable broadly, because they still have to deal with the local conditions and regulations, and it’s a piece for sure.

What I wanted to do was come up with something that could get lots of people involved on a more emotional level where they weren’t really being asked to make a big commitment. But they could at least dip their toe in the water — at least do something.

So it seems like you’re creating this demand through a “vote with your dollar” approach.

No doubt, no doubt, yeah. It is sort of a question of vote with your pocketbook; that’s one of the problems is that we’ve had a “Washington ought to do something about it” attitude, and I’m not saying we shouldn’t go for regulator answers as well, but what I’m really advocating is let’s add market demand to the picture, as well. Because if you have people spending money to create demand for solar, business will get behind that and build solutions that will create more of it.

How would my energy bill look if I used the SunPort?

Unchanged. This is completely outside of the utility part of the picture. It’s not that it doesn’t relate to it; it’s just that one of the barriers to pushing solar forward is dealing with the regulated side of the power grid.

There are lots of developers and independent power producers that build or want to build solar and connect to the grid. When they do that, the people that operate the grid will pay them for the electricity — the energy — and then they have this other product that they create which is the solar REC, and they’ve gotta do something with that or they try to do something with that, and the grid is not really interested in paying for generic electricity any more than they normally pay and so the REC is where the delta is between the value of solar and the value of just generic power. 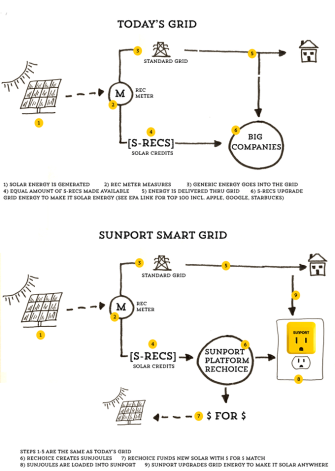 The whole point is to enable more of those types of independent systems to connect to the grid and supply electricity. There are lots of reasons that utilities are doing that, but when it comes down to actually making the economics work for a system to connect, basically you have two things you can buy from it: One is power and the other is RECs. The RECs are the piece of it that really needs to be boosted and market demand for those RECs is something that we really don’t have in any meaningful way today.

I think a large part of it is that I didn’t know about RECs until I saw the SunPort.

So, I guess, is it a failure of these companies not pushing this out?

I wouldn’t say it was a failure of theirs. I think the original insight about RECs was to just create this commodity that could put value on the environmental attributes of renewable resources, which is a great idea that was originally adopted for regulatory solutions with utilities where they’d create a renewable portfolio standard, and this was sort of the counting mechanism for that where they say, “You know we want you to have X percent of renewable electricity.” So, then they would acquire the RECs so that they had the claims for those. OK?

Then business got on board, too, where you’ve got companies that are using renewable energy to power their plants or their data centers, or whatever they do, and RECs are the counting mechanism for that. So, they were really originally intended as these bulk units that [were] used by business and that was really our insight is that as long as that stayed in the business market, it was going to be very limited by regulatory demand and a few enlightened businesses that were willing to spend extra money to do it.

But if it moved into the consumer market and people started demanding it there, then we could have millions of people that just have little, tiny incremental demands for renewable energy. But just by virtue of getting the crowd involved, it creates a lot of demand, and the other thing is that part of the job of SunPort is we purposefully made it visible and tangible, so that it would be a bit of a badge of honor and a way to start a conversation and a way to say, “This is who I am; this is what I care about,” and to educate people — to get the word out.

Because, people have felt disenfranchised as far as solar goes. When you talk to people that don’t have the means or, like college students, where they love the idea, but they see solar power as something for their parents, and we wanted to create something that anybody could feel empowered to take action on. Whether that little piece is the actual demand that [they] create or whether it’s driving a stake in the ground and saying, “This is what I care about; this is what I believe in; this is who I am.” Both of those things are very helpful and in that sense it’s even the entry point for a lot of people to get into renewable energy. Where today the college student uses a SunPort to power the fridge in the dorm and in 10 years he or she is putting it on the rooftop of the house that they just bought in the suburbs, because they’ve identified with that movement.

So, it’s kind of a nice little gateway to solar.

Absolutely. It’s not a replacement or any kind of substitute for larger systems. First of all [the SunPort] relies on larger systems and secondly it’s a gateway to get people involved where, yeah, maybe they will put it on their rooftop.

This can cause a lot more solar to be used and it can get a lot more people to identify themselves as involved in solar and taking part in it, and at the right time in their journey.

If you’re interested in funding the project or maybe want more information about the SunPort, check out Paul Droege’s Kickstarter page. This interview has been edited.

As the saying goes: “Pain is inevitable. Suffering is optional”.
Up Next
Surprising Science

Researchers at MIT want to build a compact fusion reactor that could potentially produce near inexhaustible energy by the end of the decade.