The idyllic islands of the Pacific Ocean typically have little role to play in the wider world aside from offering white shores and blue oceans that come about as close to paradise as it gets. But in World War II, these islands were bloodily contested. They represented strategic positions for the Allies, who could establish bases for bombing raids on the then-Axis Japan. In turn, Japanese soldiers were sent to these islands to defend them at all costs. Many, including a lieutenant named Hiroo Onada, were instructed to fight until killed; surrender was not an option. Hiroo Onada and others obeyed these orders literally. In fact, Onada continued to fight for 29 years after World War II ended.

Twentieth-century Japan had transformed the ancient concept of Bushido — a military code of conduct presented in some texts as “a way of dying” that demanded samurai be prepared to lay their life down for their lords — into a full-on propaganda tool to stir up nationalism and a culture of death before surrender. Surrender was so anathema to World War II Japan that Emperor Hirohito’s surrender speech did not even feature the word “surrender.” Instead, he characterized the coming capitulation as “enduring the unendurable and suffering the unsufferable.”

This attitude led Lieutenant Onada and his men to go into hiding on the mountains of Lubang Island in the Philippines after Allied forces took the island back from Japanese control in February of 1945. Major Yoshimi Taniguchi was evacuating the island with other Japanese soldiers but instructed Onada and other men to stay and fight. “It may take three years, it may take five, but whatever happens we’ll come back for you,” the major said. “As an intelligence officer,” said Onada, “I was ordered to conduct guerrilla warfare and not to die. I had to follow my orders as I was a soldier.” The war ended in September of that year, but Onada continued to follow his orders.

During his time in the jungle, Onada engaged in guerilla warfare and several skirmishes with the local Filipinos and police. In October of 1945, he and his team found a leaflet that a villager had left. It read: “The war ended on August 15. Come down from the mountains!” Later that year, more leaflets came, but Onada and his men believed them to be American propaganda. They were full of mistakes, he said, and so they could not have come from the Japanese. And how could the Japanese have surrendered, anyway? So, they stayed in the jungle for 29 years. 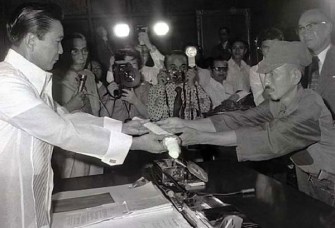 The holdouts continued to fight local Filipino police and others, who fought back in self-defense. The continued engagement was taken as a sign that the war was still on. One of Onada’s men eventually surrendered in 1950. Another was killed by a search party in 1954 looking for the group. After burning a field of rice in 1972 as part of their guerilla war, police killed Onada’s last companion. Now, he was alone in the jungle.

But back in Japan, Onada and his men had become something of an urban legend. Although he had been declared legally dead by Japan, the holdout’s presence on the island was almost certain; after all, he had been engaged in guerilla warfare for nearly 30 years and had killed 30 Filipinos after the war had ended. So, in February of 1974, a college dropout named Norio Suzuki decided to go look for him. “[I’m] going to look for Lieutenant Onoda, a panda, and the abominable snowman, in that order,” he told his friends.

Surprisingly, Suzuki did find Onada, but the lieutenant still refused to surrender. Onada would only surrender were he ordered to do so by his commanding officer: Major Yoshimi Taniguchi.

Suzuki returned to Japan and tracked down Taniguchi, by then an old man and a bookseller. He brought him back to Lubang to meet with Onada. Twenty-nine years after the end of World War II, Taniguchi relieved Onada of his duty. Before he left for Japan, however, Onada gave the Philippine President Ferdinand Marcos his sword in surrender — Marcos returned the sword and pardoned Onada for his actions during what Onada had believed to be wartime.

Onada was given a hero’s welcome in Japan in testament to what is either his incredible discipline or fanaticism. The island nation had changed drastically since he was gone, changes that Onada couldn’t entirely come to grips with. In 1975, Onada retired to Brazil to raise cattle, later returning to Japan in 1984 to start a wilderness survival school.

Tags
asiahistorymilitarynuclear weaponspeaceunited stateswar
In this article
asiahistorymilitarynuclear weaponspeaceunited stateswar
Related
Strange Maps
The horrors of World War II air war, in one stark map
This graph shows how badly German cities were hit by Allied bombing raids.
High Culture
Why are flood myths so common in stories from ancient cultures around the world?
Could the prevalence of flood myths around the world tell us something about early human migration or even the way our brains work?
The Past
The Wild West was lawless and chaotic — and the police helped keep it that way
Lawmen and outlaws were often the same people.
Thinking
6 great philosophers and how they used their political power
Most philosophers merely contemplate the world, but what about the ones who actually tried to change it?
The Past
Ancient migration: Bering Strait land bridge from Asia to North America was not a one-way road
Ancient humans crossed the Bering Strait land bridge from Asia into North America. But some of them went back.
Up Next
Neuropsych
The doctor who prescribed the meaning of life to his patients
Anxious? Dr. Frankl suggested you take a different view of things.