After two centuries of unprecedented growth, human population will begin to shrink after 2064. This is good news for a number of reasons, most importantly because it signals an increase in education of girls and women.

That’s the word from a large team of researchers at the Institute for Health Metrics and Evaluation (IHME) at the University of Washington’s School of Medicine. Their findings were recently published in The Lancet.

The team predicts that global population will peak at 9.7 billion around 2064 before dropping to 8.8 billion at the turn of the century. While that contradicts previous findings by the UN, it’s still a billion more people than inhabit the earth today.

For humans to replace the population, the total fertility rate (TFR) has to maintain a level of 2.1 births per woman. Due to improvements in contraception access and more available education for girls and women, the impetus for having children has declined.

In some regions, the decline has been dramatic. For example, the TFR in Italy and Spain is now 1.2 while in Poland it’s 1.17. Even in “high-fertility” regions, the tide is changing. Sub-Saharan African women averaged 4.6 births per woman in 2017; that number is predicted to drop to 1.7 in 2100. Niger has the highest fertility rate in the world: 7 births per woman. In 2100, that is predicted to fall to 1.8.

Population decline will have major financial consequences; the researchers believe nations have to begin planning for this now. Discussing working-age individuals (aged 20-64 years), they write,

“Huge declines in the number of workers were forecasted in China and India, alongside steady increases in Nigeria. By 2100, India was forecasted to still have the largest working-age population in the world, followed by Nigeria, China, and the USA.”

Mapping global population and the future of the world | The Economistwww.youtube.com

Dr. Richard Horton, editor-in-chief of The Lancet, comments on the study, writing,

“It offers a vision for radical shifts in geopolitical power, challenges myths about immigration, and underlines the importance of protecting and strengthening the sexual and reproductive rights of women. The 21st century will see a revolution in the story of our human civilisation. Africa and the Arab World will shape our future, while Europe and Asia will recede in their influence.”

Indeed, the populations that will shrink the fastest include Asia and central and eastern Europe. Japan, which has been grappling with this reality for years, will drop from 128 million in 2017 to 60 million in 2100; Thailand, from 71 to 35 million; Portugal, 11 to 5 million; and South Korea, 53 to 27 million.

The study focuses on expansion, though it doesn’t discuss how quickly we’ve reached current levels. After 350,000 years of Homo sapiens on Earth, we hit one billion people in 1804. It took 123 years to add another billion; 33 years to get to three billion; 14 years to four billion. If we hit eight billion by the end of this decade, we’ll have quadrupled our population in just a century.

Those are unsustainable numbers. As the COVID-19 pandemic has proven, supply chain management and health care systems in many countries are broken, especially in America. Thanks to the outsourcing of labor and our for-profit health care model, income inequality is breaking our society. Adding more humans to our population during a pandemic, with seniors being the most vulnerable population, should give us pause. 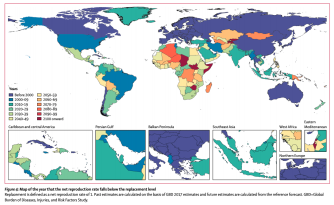 Of course, procreation is more a biological process than a philosophical one. Survivability is the goal of every species. That said, we’ve mitigated the potential damage of overcrowding by contraception and education, as the study suggests. Either we need to more fairly distribute resources around the world—tough to imagine in a capitalist system—or pay the price for birthing too many humans. The latter could be quelled if we have fewer children.

Stein Emil Vollset, Professor of Global Health at IHME and lead author of the study, weighs the costs and benefits:

“While population decline is potentially good news for reducing carbon emissions and stress on food systems, with more old people and fewer young people, economic challenges will arise as societies struggle to grow with fewer workers and taxpayers, and countries’ abilities to generate the wealth needed to fund social support and health care for the elderly are reduced.”

The researchers believe immigration will be an even more pressing issue in the coming decades. This might mean less surface area being inhabited as people crowd into environmentally and financially robust regions—a forthcoming reality due to climate change anyway.

In conclusion, Professor Ibrahim Abubakar at University College London comments on the study, noting, “The distribution of working-age populations will be crucial to whether humanity prospers or withers.” Depending on your age, you might not have to worry about this, but our children and grandchildren certainly will.

Tags
economicsFinancial risksglobal developmentGlobal healthpoliticspopulation
In this article
economicsFinancial risksglobal developmentGlobal healthpoliticspopulation
Related
The Past
How people crossed the Atlantic Ocean before commercial aviation
For centuries, the only way to travel between the Old and New World was through ships like the RMS Lusitania. Experiences varied wildly depending on your income.
The Past
How the crusades spawned the world’s first financial services company
The Knights Templar were not only skilled fighters, but also clever bankers who played a crucial role in the development of Europe’s financial systems.
Putin’s war: “The single biggest geopolitical mistake since 1989”
“This is much deeper than just ‘let’s figure out how we can get both sides to get along.’”
▸
15 min
—
with
Ian Bremmer
How resisting conformity can lead to real world progress
Thinking as a group and going along with the loudest voices can feel easy and even natural. But to make real positive change in our world, it’s important to hear all voices and question the perceived majority.
▸
5 min
—
with
Todd Rose
10% of people are dominating social media. What if the other 90% spoke up?
Social media isn’t the majority – it’s the vocal fringe.
▸
with
Todd Rose
Up Next
Starts With A Bang
How Massive Neutrinos Broke The Standard Model
According to the Standard Model, the leptons and antileptons should all be separate, independent particles from one another. But the three types of neutrino all mix together, indicating they must […]