Money is nowhere on this list — odd, given how much weight we assign it during the course of life. That’s likely the consequence of a competitive market in a world with a serious resource distribution problem. We lose sight of what matters until it’s (almost) too late.

There’s a deeper question here about the nature of work, which is, of course, fluid. Over the course of my Gen X lifetime, I’ve watched the expected employment regimen evolve from securing a good job at a dependable company to ensure a pension — my father worked for more than four decades on this path — to the challenging realities of the “gig economy,” which I’ve been involved with for over 15 years as a contractor.

Before returning to meaning, let’s look at two new reports that highlight tectonic shifts in the current employment landscape. The data come from the extremes: one set from senior citizens, the other millennials. 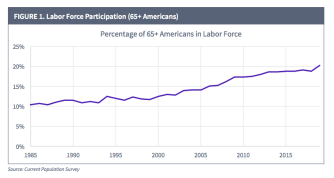 In a report compiled by United Income, over 20 percent of Americans aged 65 or over are either employed or looking for work. This represents the highest number to date. Interestingly, over half of these seniors are college-educated, pushing income rates up by 63 percent from 1985. Another boon is health: 78 percent of those employed report being in good health or better.

While there are positive benefits to this — people derive meaning from work at any stage of life; remaining socially active is a driver for good mental and physical health — there is a downside: many Americans cannot afford to retire. In a youth-obsessed culture that makes employment harder to secure as you age, the notion of sending out your resume in your late 60s is a tough pill to swallow.

An interesting survey by TD Ameritrade of millennials age 21–37 highlights how the youngest members of the workforce feel about the future. The statistic receiving the most attention: over half of respondents expect to be millionaires in an era when the chances for that are worse than in previous generations.

The data were skewed heavily male, with 73 percent believing millionaire-status to be in the cards compared to 38 percent of females. Another eye-opening generational change: the average age millennials enter the workforce is 25; males believe their retirement will come at 53, while woman claim 59. That’s quite a shift from the surging number of over-65s slinging coffee beans.

Not that all hope is lost. Instead of believing millions will just roll in, 79 percent of male millennials actively save money, alongside 62 percent of women. Thirty-nine percent of this age group is storing money away for an emergency, an especially important trend since 40 percent of Americans cannot cover a $400 emergency. It’s good to see the younger generation being proactive with savings. 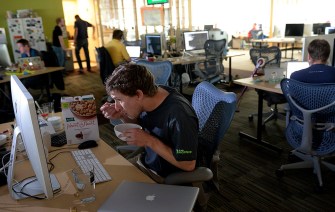 27-year-old Garston Tremblay, a developer, enjoys a bowl of cereal at his desk while at work at Rally Software Development in Boulder. Image source: Denver Post Photo by Cyrus McCrimmon

These two reports highlight a stark reality about work and income. Societies are fluid; few joining the workforce today expect to be at the same company in five years, much less 50. Yet both age groups, representing opposite ends of the employment spectrum, are in different financial situations than they expected (or expect) to be. Considering that a “rough estimate” of $1–$2 million is needed to “retire fairly comfortably,” many Americans will be working as long as possible simply to survive.

As mentioned, money was not among the key attributes for deriving meaning in life. Work can provide meaning; in fact, if you treat your occupation meaningfully, your days will be impactful and potentially transformative. Yet when a career is purely for the financial benefits — or mere survival, as is the case of the over half of Americans earning under $40,000 a year — it’s harder (though not by any means impossible) to derive meaning while running in the rat race.

When Abraham Maslow published his “hierarchy of needs” in a 1943 paper, physiological necessities (health) and safety (requiring money) provided the foundation of the pyramid. At the top are love/belonging, esteem, and self-actualization, which aligns with the principles espoused by nursing home residents. It’s tragic that it takes many until the end of life to realize this, that we don’t have the social safety nets in place for more people to climb the pyramid earlier in life.

Here’s how to design a work environment that gives control to employees and stimulates open conversation.
▸
with
Todd Rose
Neuropsych

If love is an addiction, your first love is the first dose.
The Present

Your emotional brain is being manipulated to shop more, but there are ways to resist.
▸
6 min
—
with
Big Think
Up Next
The Present

A scientific look into a ubiquitous phenomenon.