The smell is the first assault even though the triggers for sensory overload occur concurrently. That is by design. As the fog of cigarette smoke invades your nostrils (and clothing; look forward to those dry cleaning bills) thousands of machines cry out in the key of C. That key is believed to be less fatiguing than others; every one of the 400 sounds ringing from slot machines is thus tuned in this manner. They want gamblers awake — sort of.

My dilemma: I hate Las Vegas, but I love my father, who lives in the city, and I love Cirque du Soleil, so each visit includes casino visits. More my speed are off-strip Indian and ramen joints — Vegas food culture, also by design, is exceptional — and hiking amid the stoic architecture of Red Rocks. Casinos remind me of malls: opportunities for sociological observation, collecting stories for future journalistic endeavors. Capitalism, unhinged.

Casino design has long piqued my curiosity. As an early riser, I’ve always wondered what would make people choose to spend their hard-earned money to travel to a city in the middle of nowhere in order to waste it feeding quarters into a machine blatantly stacked against their favor at 5:30 in the morning.

Cigarettes and gambling go hand-in-hand. We’re well aware the former is addictive; if not death, then certainly a host of health problems will plague the addict. What of the second? Why do we not discuss gambling addiction more broadly? Why does a problem this serious have to stay in Vegas?

Inside the brain of a gambling addict – BBC News

Inside the brain of a gambling addict – BBC News

And the problem is serious. As Chris Hedges writes in his latest book, America: The Farewell Tour, 20 percent of gambling addicts attempt suicide, the highest percentage of all addictions. Though the opioid crisis is not slowing, there are governmentally-funded efforts combating it. Cigarette manufacturers are required to post warnings in large fonts alongside photos of diseased lungs. Smartphone addiction rewires our brains, but we haven’t had the courage as a society to face that one yet. From alcohol to sex, at least nominal attempts at curbing behavior are attempted. For the most part, gambling escapes this fate.

The extent of online data collection was an eye-opener for many, but Hedges exposes the insidious lengths casinos collect information in order to keep customers hooked. Player cards allow management to “manage 20,000 behavior models per second.” The seemingly innocuous machine branded with your favorite superhero or television show adapts to your playing rates as it learns your behavior. If you become fatigued, there’s a fix for that too. According to the author,

“These profiles know at what point a player accumulates too many losses and too much pain and walks away from a machine. A few moments before the pain threshold is reached, a hostess will magically appear with a voucher for a free meal, drinks, or tickets to a show.”

In 2016, Americans lost $116.9 billion dollars gambling; 85 percent of that was dumped into slot machines. Gambling replicates the pharmacological effects of opiates. The casino floor is purposefully designed to disorient and confuse. Right angles are a no-no on carpets, as they offer a physical option. Sharp angles ground you in space, humanity’s version of a fork in the road. Casinos suspend time, and therefore space, which is why there are no windows. Cluing you into your circadian rhythm might cause you to leave. 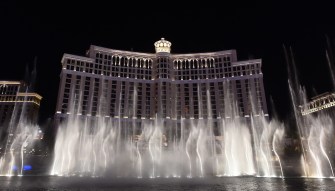 A new show at The Fountains of Bellagio is choreographed to a medley of DJ/producer Tiesto’s songs on September 17, 2014 in Las Vegas, Nevada. Image source: Ethan Miller / Getty Images for MGM Resorts International

Once gambling is in your bloodstream, it crosses industries. A new study published in Addictive Behaviors, from the Center for Gambling Studies at Rutgers University, notes that over half of regular gamblers (those who gamble at least once a month) trade cryptocurrencies, which the researchers compare to high-risk stock trading. When gamblers engage in both, the likelihood they’ll suffer anxiety and depression, gateways to suicidal tendencies, increases. As Lia Nower, director of the center and co-author of the study, notes,

“People who trade cryptos look very much like those who trade high risk stocks such as margins and options. Therefore, those who like risky stocks are also more likely to jump into the cryptocurrency trading market compared to those who, for example, invest in stocks over the long term.”

For decades, gambling was listed in the DSM, the bible of the American Psychological Association, as an impulse-control disorder. After 15 years of debate, pathological gambling was moved into addiction disorders in DSM-5, due to the chemical influence it has on our brain’s reward system. Gamblers and drug addicts even share genetic predispositions.

As Hedges writes, the rush of gambling provides stimulation during a time of a dysfunctional political system, decreased labor rights in the gig economy, and social stagnation in which virtually no serious issue is entertained without having to choose sides. In times of such uncertainty, we seek comfort at every turn. While conducting his famous stimulation experiments with rats and pigeons, behavioral psychologist B.F. Skinner used slot machines as the guiding metaphor for his study, which found that the animals compulsively press levers when they don’t know when or how much they’ll be rewarded. Follow the mammalian chain of command and we arrive at the strip.

Hedges interviews cultural anthropologist Natasha Dow Schüll, author of Addiction by Design: Machine Gambling in Las Vegas. Whether you gamble or not, according to Schüll high-risk thinking is affecting all of us, also by design. It’s the atmosphere of the moment, and the forecast is not sunny. She concludes,

“If you look at the way a casino is designed, and you remember that Trump is a designer of many casinos, including his non-casino properties, they follow the same design logic of disorientation and trying to sweep people away from themselves, away from rationality, away from a position where they have clear lines of sight and can act as decision-making subjects.”

Protein fibrils accumulate in the brain during neurodegeneration. Cryo-electron microscopy has now uncovered fibrils of an unexpected protein.
Neuropsych

Learning another language might make you richer, sexier, and smarter. Why not try it?
Up Next
Starts With A Bang

Human beings can exist on our world today because of the ingredients and rules that make up the Universe. If things were too different, intelligent observers of any type would […]