The 2019 federal budget earmarks $400 million of military aid to support Ukraine. The Trump administration bypasses Congress and orders a freeze on Ukraine’s foreign aid, with $391 million yet to be paid out. Days later, during a phone call with Ukraine’s new president, Volodymyr Zelensky, Trump asks for a favor.

But does this timeline of events properly connect a quid with its associate quo? Yes, said House Democrats when they kicked off their impeachment inquiry. “The quid pro quo is in the President’s words,” Representative Jon Garamendi (D-Calif.) told CNN.

But Trump’s defenders in the GOP have a different read. As Representative Doug Collins (R-Ga.) told reporters: “We read it. There was a discussion among members about it. From the way the speaker made it out to be yesterday, I was expected something there. And when you look at it… there’s nothing there.”

And Senator David Perdue (R-Ga.): “I just am embarrassed almost that the speaker would take this document, having not seen it, and take this to an impeachment conversation. There’s nothing in this document that backs up the whistleblower report. [The media] talked about eight quid pros in there. I can’t find one.”

If Collins and Perdue were hunting for or-else statements, then their math is on point. There’s not one to be found in the reconstructed transcript. But as cognitive scientist Steven Pinker reminds us, language seldom drifts so neatly on the surface.

In a New York Times op-ed, Pinker breaks down the reconstructed transcript to show that an overt if-then statement is not necessary to prove a quid pro quo. Removed from partisan squabbling and analyzed as we would most any other conversation, the request becomes clear.

“But to most readers, Mr. Trump’s claim that he was merely musing about his druthers does not pass the giggle test,” Pinker writes. “That is because people in a social relationship rarely hammer out a deal in so many words but veil their offers in politeness and innuendo, counting on their hearers to listen between the lines.”

In fact, such innuendos and euphemisms are part of our everyday language toolkit.

As Pinker writes, we often ask dinner guests, “I was wondering if you could pass the salt.” Taken literally, the request makes you sound dim. Your guest holds down a job, drives a car, and can perform any number of complex tasks. Why should you question her ability to lift a tiny container and deliver it all of two feet?

But by couching your request in this non sequitur, you add an extra slathering of politeness to the proceeding “without seeming to treat her like a flunky.” In turn, the guest fills in the mental blanks, understands your request, accepts your politeness, and passes the salt with a “Sure thing!”

Allusive remarks are so pervasive in our use of language that they’ve become foundational to art and storytelling.

When Don Corleone says, “I’m going to make him an offer he can’t refuse,” not even a rube believes he’s referencing his limitless generosity. Everyone realizes that studio executive won’t be able to refuse because the Godfather won’t be asking. Without an ear for such dramatic innuendo, film and literature would feel simply alien to us. 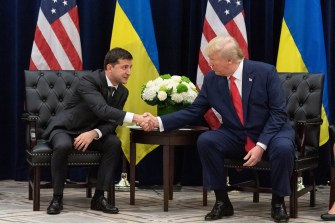 “The Trump-Zelensky dialogue could be used in the chapter of a linguistic textbook on conversational analysis,” Pinker writes. He then proceeds to outline that chapter.

The summarized portion of the call opens with Trump congratulating Zelensky on his victory, and Zelensky praising Trump for the skills and knowledge he derived from Trump’s election. Trump then steers into the prerequisites of the call.

Pinker notes that announcing an undesirable state is a strategy to avoid demands while still priming someone to fix the situation. Again, this isn’t a strategy employed by politicians and mobsters alone. Pinker offers the classic example of someone saying, “It’s cold in here,” to prime their cozy spouse to close the window.

Clued into Trump’s underlying intention, Zelensky replies with the due diligence of a cozy spouse. Falling over himself to agree that the U.S. supports the Ukraine better than the EU, he states, “We are ready to continue to cooperate for the next steps specifically we are almost ready to buy more Javelins from the United States for defense purposes.”

His goal is to show that Ukraine is reimbursing the U.S. with reciprocity. He points out that Ukraine is ready to “continue” cooperating and they plan to purchase Javelin missiles from the United States. While the foreign aid is never outright mentioned, it sneaks in between the lines here since Ukraine uses those funds to purchase the missiles from U.S. arms makers.

Trump isn’t satisfied: “I would like you to do us a favor though, because our country has been through a lot and Ukraine knows a lot about it.”

For Pinker, that “though” is the quid-pro-quo glue. He writes that the word signals that Zelensky’s previous cooperation has not met the requirements for true reciprocity. Another favor is needed, and only Ukraine can help.

Trump then immediately details what that favor is: He wants Zelensky to investigate Crowdstrike, a debunked right-wing conspiracy theory, and assist Attorney General Barr with an investigation into the Bidens. Quid meet quo.

As Pinker concludes: “His supporters insist he should be taken ‘seriously but not literally.’ Yet this time it may be the nonliteral meaning of his words that proves his undoing. The common-sense interpretation of his conversation makes it impossible for him to maintain, ‘I did not have quid pro quo relations with that man, Mr. Zelensky.'”

As the President of the United States, I have an absolute right, perhaps even a duty, to investigate, or have investigated, CORRUPTION, and that would include asking, or suggesting, other Countries to help us out!

The emperor is naked, but is that a crime?

Of course, Pinker’s op-ed is a linguistic analysis, and much like the Clinton impeachment, the linguistic linchpin—what is “is” anyway?—is only part of a broad argument centering on the appropriate use of the powers of the president.

Today, the question is whether the quid pro quo was for national security—the kind of quid pro quo supporters rightly point out has been demonstrated by past presidents—or whether Trump used his office for private gains in the 2020 election. And even if the quid pro quo is not found to be criminal, it may still be an impeachable offense if an abuse of power.

President Trump’s own defense has evolved from “no quid pro quo” to “quid pro quo is fine.” As he tweeted: “As the President of the United States, I have an absolute right, perhaps even a duty, to investigate, or have investigated, CORRUPTION, and that would include asking, or suggesting, other Countries to help us out!”

Are you the one? How to flex your value and beat out the competition

[fusion_dropcap boxed=”no” boxed_radius=”” class=”” id=”” color=”#d84923″]W[/fusion_dropcap]hy should customers buy from you instead of your competitors? That’s the question at the heart of making a sale in a competitive market, says […]