Greenland has been having quite its day in the spotlight lately. Recently, President Trump has been talking about purchasing the ice-covered island. For Trump, the idea has captured his real estate sensibilities. He sees it as a deal of a lifetime that would cement his legacy in US history. President Thomas Jefferson purchased the Louisiana territory from the French in 1803, and President Andrew Johnson bought Alaska from Russia in 1867.

To the Trump administration’s advisers, the purchase of Greenland could be seen as a way to thwart China and Russia’s arctic agendas and as a way to gain new resources.

But Greenland is an autonomous Danish territory, and neither the Danes nor officials from Greenland are entertaining this kind of talk. In recent weeks after Trump’s inquiry went public, officials from both Greenland and Denmark have outspokenly condemned the idea as both foolish and a waste of their time.

Greenland has a population of around 56,000. All domestic issues are taken care of by their internal government, while Denmark deals with foreign and security policy.

Trump had originally scheduled his first visit to Denmark in early September of 2019, but reneged publicly after the Danish Prime Minister shot down the Greenland idea.

#Greenland is rich in valuable resources such as minerals, the purest water and ice, fish stocks, seafood, renewable energy and is a new frontier for adventure tourism. We’re open for business, not for sale learn more about Greenland on:http://Greenland.com

Response from Greenland and Denmark

Greenland’s Ministry of Foreign Affairs was quick to point out that Greenland is not for sale, but is more than happy to encourage greater relationships with the United States and other international communities.

Steve Sandgreen, secretary to Greenlandic Premier Kim Kielsen also echoed this sentiment saying, “Of course, Greenland is not for sale… We have a good cooperation with the USA, and we see it as an expression of greater interest in investing in our country and the possibilities we offer.”

Since all of this talk has been unofficial, the Government of Greenland has also said that they will not issue any further comments. 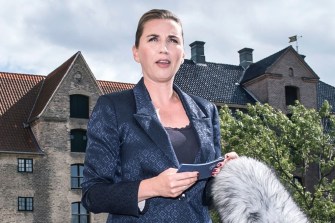 Denmark’s Prime Minister Mette Frederiksen talks to the press after President Trump cancelled his state visit after her government said its territory Greenland was not for sale on August 21, 2019 in Copenhagen, Denmark. – “I am both annoyed and surprised that the US president has canceled a state visit,” Frederiksen told reporters, adding: “Denmark and the US are not in crisis, the US is one of our closest allies.”

With just two weeks to go before his scheduled trip to Denmark, Trump announced on Twitter that he postponed his trip after Prime Minister Mette Frederiksen’s comments regarding the Greenland issue. Frederiksen is on record for saying that the idea was absurd.

“Denmark is a very special country with incredible people, but based on Prime Minister Mette Frederiksen’s comments, that she would have no interest in discussing the purchase of Greenland, I will be postponing our meeting scheduled in two weeks for another time,” Trump wrote on Twitter Tuesday night.

It looks like the idea might be dead in the water as Trump continued on and said, “The Prime Minister was able to save a great deal of expense and effort for both the United States and Denmark by being so direct. I thank her for that and look forward to rescheduling sometime in the future!”

Earlier this same day, Frederiksen said that she was both “disappointed and surprised” about the cancellation.

Later on as Trump was leaving the White House for a trip to Kentucky, he doubled down on his comments and how he felt about the snub from Denmark.

“I looked forward to going but I thought the prime minister’s statement that it was ‘absurd,’ that it was an absurd idea, was nasty. I thought it was an inappropriate statement. All she had to do was say, ‘No, we’re not interested.'”

“Don’t say what an absurd idea that is,” Trump continued on. He intends on going sometime in the future to Denmark to meet. Trump also mentioned Harry Truman who had the idea earlier in the 20th century and that the Greenland purchase proposal was “just an idea, just a thought.”

While Frederiksen was still nonplussed about the whole ordeal, she told reports in Copenhagen, that “the invitation for a stronger strategic cooperation with the Americans in the Arctic is still open…” and regarding the diplomatic relationship with the United States “this does not change the character of our good relations.”

Greenland is a rich country filled with natural resources that stretch far and wide through its 811,000 square miles. Greenland receives $591 million in subsidies from Denmark every year, which according to U.S. and Danish statistics is 60% of their annual budget.

This was partly one of the reasons Trump liked the idea – as he thought there would be a mutual benefit for him to take the territory off their hands. While Greenland is part of North America, it is more closely politically and culturally aligned with Europe. President Truman offered to buy it in 1946 for $100 million, but the Danes refused to sell. Before that in 1867, the State Department was looking into buying both Greenland and Iceland.

Yet a lot of things have changed over the years to make ideas like this become antiquated.

On the feasibility of this proposal, H. Jefferson Powell, a former deputy assistant attorney general and current professor of constitutional law at Duke University School of Law said, “If Congress OK’d the expenditure of the money, legally from a domestic law standpoint, there’s no reason why we couldn’t do this… That’s the Louisiana purchase, and it’s been settled for two centuries.”

However, Powell was quick to point out that the legal jurisdiction of Greenland is different than other European colonies in the 19th and 20th century.

“I don’t think any Western government would take seriously the idea that it could transfer its sovereignty to another sovereign just because it was expensive to maintain subsidies.”

Greenland is of strategic importance. And unfortunately as climate change transforms these once freezing ice blocks of land, national powers are going to see the tactical importance and influence to be had on this land mass.

Greenland is taking a horrible hit because of climate change, while administratons like Trump’s are refusing to adequately address the underlying issues. The Greenlandic Perspectives Survey (GPS) has found that 76% of locals have personally experienced a direct effect of global warming.

Kelton Minor, lead author of the survey told the Guardian that “The impact of melting sea ice on the Greenlandic way of life cannot be underestimated.”

Sea ice is treated in a much different way in Greenland. It is an open highway for them and connects Greenland’s citizens to neighboring communities. When the water doesn’t freeze like it’s supposed to in the winter, it affects people in negative ways.

A great deal of locals still rely on hunting and fishing to supply themselves with food. This way of life will be threatened by climate change.

While we worry about whether or not buying Greenland is feasible or worth anything in some terrestrial mammalian squabble amongst nation states, the planet we’ve afflicted is already radically changing the island in irreversible ways.

U.S. states vary radically in terms of electricity generation. Vermont is the cleanest, while Delaware is the dirtiest.
Up Next
Neuropsych

In a new study, people who posted a lot of selfies were generally viewed as less likeable and more lonely.