A groundbreaking study estimates the real economic consequences that climate change would bring to the U.S. by the end of the 21st century. Economic disparity will grow, hitting the American South the worst, while the country’s wealth will shrink.

Researchers integrated climate science, econometric analyses and process models to compute a very detailed assessment of damages. The pioneering methods used by the study resulted in 29,000 simulations of the economy that focused on real-world costs and benefits to the communities in agriculture, health, crime, energy demand and labor.

For anyone who’s ever felt the effects of climate change to be too nebulous, the researchers provide concrete numbers – each one degree Celsius that global temperatures are going up will cost the U.S. economy 1.2% of its GDP.

The new paper is the first to be released by the Climate Impact Lab, a consortium of 25 economists and policy experts. The group is guided by researchers from University of California, the University of Chicago, Rutgers University and Rhodium Group.

What the scientists accomplished gives us a much more precise picture of the repercussions of climate change. Previous estimates only looked at the country as a whole, while this study relied on dozens of regional microeconomic studies and observed data to build a model with unprecedented amount of detail.

If no changes are implemented, the poorest counties in the U.S. will experience losses of up to 20% of their income by the middle of the 21st century. In another estimate, the U.S. GDP could shrink somewhere between 1.6 and 5.6% by 2100. Overall, the changing economics will cause “the largest transfer of wealth from the poor to the rich in the country’s history,” said Solomon Hsiang, one of the leaders of the study who teaches public policy at the University of California, Berkeley. 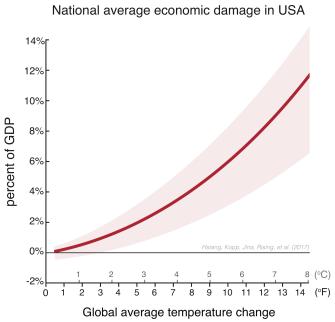 What’s more, because the researchers committed themselves to only using observed data, they omitted some of the decidedly negative potential effects of climate change that they could not yet quantify. Their study does not include “non-market goods” like damage done to nature, including the extinction of animals and loss of biodiversity.

Similarly, this study doesn’t concern itself with “tail risks” – events with catastrophic consequences that are hard to predict. Many prognosticators believe global warming will cause problems like mega droughts, stronger hurricanes, social unrest, migration crises – all types of disasters that can also lead to military conflicts.

What the study does predict is that the hot places will only get hotter and there will be large migrations from Texas, Florida and the Deep South due to worsening harvests, increases in energy costs and heat-related illnesses.

In an email interview with BigThink, Amir Jina, a postdoctoral scholar in economics at the University of Chicago explained why the South, in particular, will be so hard-hit according to their modeling:

“One of the main things we learn from looking at these relationships in such detail is that there are a lot of threshold effects. So if we take mortality, cold days harm people, and hot days harm people. While days in the middle don’t have major effects. If I am in a place that has a lot of cold days and I warm up a bit, I move away from the harmful days and into the less harmful ones. On the contrast, if I am near or at the threshold above which hot days will harm me, I’ll just experience more and more damages. If turns out that many places in the South are very close to those thresholds for a number of sectors. What’s more, a lot of the coastal damage is seen in southern states, so it is a perfect storm for them.”

Its not all bad news, however. Some parts of the country will do better, in particular New England, the Great Lakes and the Pacific Northwest. These areas should benefit from longer growing seasons and a decrease in deadly winter days. The income of counties in these parts could go up 10% by 2050, but even that could be dampened by issues like migration from communities under water due to rising sea levels or suffering in other ways from climate change. Mira cautions that no one will go unscathed, as “damages experienced in one part may have indirect effects in others.”

Overall, even if some areas can see a temporary economic upturn, the net effect will be very negative for the U.S., maintain the scientists, calling for measures to be taken.

“There is a chance for the US to avoid the types of damages we are showing, but it needs a bold policy response on both limiting the warming as well as adapting to the warming that we will inevitably experience,” said Jina.

You can read the study here, in Science magazine.

“If 90% of children had ADHD and only 10% of children could sit still at a desk, how would we design school?”
▸
4 min
—
with
Kathryn Paige Harden
Up Next
Starts With A Bang

How quickly are the Pillars of Creation being destroyed?