Tesla’s market cap reached about $51 billion on April 10, briefly pushing the company ahead of GM and Ford as the most valuable car manufacturer in the U.S.

The news was shocking for a few reasons. Despite their similar valuations, Tesla doesn’t produce on par with that of GM and Ford. In 2016, Tesla manufactured about 100 times fewer cars than GM, and Ford reported about 20 times the revenue of Tesla.

So how is Tesla valued so richly? 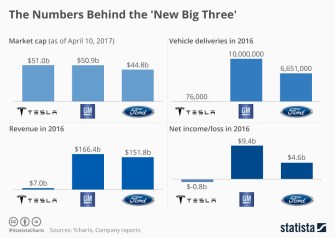 The answer probably lies in how some investors see Tesla as poised to lead the future of the automobile industry. Tesla CEO Elon Musk announced plans to produce 500,000 cars in 2018, and about 1 million by 2020. And while big car manufacturers might follow suit by shifting resources to produce more hybrid and electric cars, Tesla already has the advantage of getting batteries from its own Gigafactory—a massive multibillion-dollar facility that produces lithium-ion batteries on which electric cars run.

Investors also seem to be confident about Musk’s other pursuits. In addition to producing batteries for cars, the Gigafactory makes batteries that could one day substitute traditional electricity sources. The company is also designing solar panels that look like roof tiles and can power entire homes. And, oh yeah, Musk has this little side project where he wants to make mankind an interplanetary species by colonizing Mars through SpaceX. 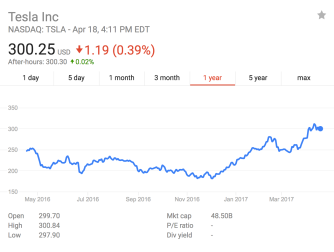 Another reason GM and Ford are valued similarly to Tesla might be due to their mammoth size. Both spend huge amounts on advertising and getting stuck with excess inventory. For instance, Ford and GM spent a combined $7.2 billion on advertising in 2015 — more than Tesla’s total revenues of $7 billion in 2016. Meanwhile, Tesla spends little on commercials and sells every car it makes almost instantly.

But despite Tesla’s lean, forward-looking mentality some analysts remain skeptical of its high valuation. And there’s reason to be: Tesla has yet to prove it can manufacture its vehicles on a mass scale, Musk might be spread too thin with his job as SpaceX CEO, and it remains unknown if Tesla’s Gigafactory investment will pay off.

We are likely to see the first humans walk on Mars this decade.
Life

When we look at the night sky, we may see junk instead of stars.
The Present

How many hurdles stand in the way of hyperloops becoming a commercial reality?
The Present

The electric car manufacturer says updates to its battery design and manufacturing process will help lower production costs.
Up Next
Starts With A Bang

No, dark energy isn’t an illusion

Supernovae observed in nearby and distant galaxies provide some of the best evidence for dark energy. But alternative theories attempt to explain the same phenomenon without it. Image credit: NASA/SWIFT. […]