Is it Halloween already? A Swedish scientist has caused a stir by advocating that in order to stem the ill effects of climate changes, humans need to start eating each other. Of course, he’s not calling for all-out cannibalism like it used to be practiced throughout history. Rather he thinks that if we just get over some very obvious taboos, we might consider eating human corpses.

While talking about the Gastro Summit focused on “food on the future” on Swedish TV, the behavioral scientist and marketing strategist Magnus Söderlund from the Stockholm School of Economics proposed that in order to truly take on the effects of climate change, we must “awake the idea” that eating human flesh should be discussed as an option in the future.

Söderlund used his tv interview on the State Swedish Television channel TV4 to give a powerpoint presentation entitled “Can you Imagine Eating Human Flesh?” It included such topics as “Is Cannibalism the solution to food sustainability in the future?” and “Are we humans too selfish to live sustainably?” 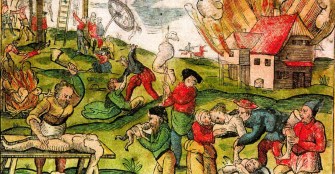 Depiction of cannibalism in the Medieval ages.

The scientist acknowledged the “conservative” taboos that exist from ancient times against consuming human flesh and sees that as the main impediment to the spread of this idea. On the other hand, Söderlund argued our future food sources would likely be getting more and more scarce. So people would have to think outside the box to get their sustenance, considering pets, insects like grasshoppers and worms. That’s also where humans come in. The scientist thinks that if people were introduced to human flesh little by little, there’d be enough takers.

The resistance that humans have to overcome in order to consider other humans food is linked to selfishness, according to the scientist. But as an expert in behaviors, he thinks that people can ultimately be “tricked” into “making the right decisions”. 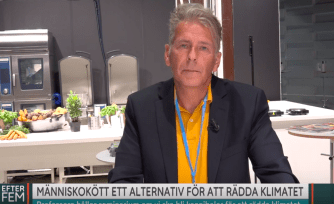 Indeed, after Söderlund’s presentation, 8% of the audience raised their hands when asked if they would be willing to try human flesh. The scientist himself is also open to “at least tasting it.”

And if you’re still not squeamish enough about this whole enterprise, there is a term to take out of this article, called “mannisko-kötts branschen”. That means “the human flesh industry”. Let’s hope it’s not really coming.

In the meantime, Söderlund plans to hold more seminars on his idea.

Check out this trailer for the Charlton Heston-starring classic “Soylent Green” (1973) for a Hollywood take on this gruesome subject:

Tags
climate changeenvironmentglobal issueshistorypopulation dynamicssocietysustainability
In this article
climate changeenvironmentglobal issueshistorypopulation dynamicssocietysustainability
Related
The Present
The “maritime Indiana Jones” who salvages shipwrecks now wants to tow icebergs
Simple physics makes hauling vast ice chunks thousands of miles fiendishly difficult — but not impossible.
Strange Maps
The horrors of World War II air war, in one stark map
This graph shows how badly German cities were hit by Allied bombing raids.
Life
Strange life forms create an “alien” ecosystem in an abandoned uranium mine
Slimy biofilms made up of bacterial and eukaryotic life forms have taken over an abandoned, flooded uranium mine in Germany.
High Culture
Why are flood myths so common in stories from ancient cultures around the world?
Could the prevalence of flood myths around the world tell us something about early human migration or even the way our brains work?
The Present
Climate change is altering the chemistry of wine
Smoke taint from wildfires is gross, even to wine amateurs.
Up Next
Life
Whales songs indicate where they’ve been — where they were born
Humpbacks swap songs at remote group of islands in the South Pacific.